As I noticed that the rock pools have started to look really pretty, I have gone out snorkelling four times the last week to photograph seaweeds. Bitterly cold (around 10°C) but worth it! It is my aim to post photo’s taken at the same spot every month this year, let’s see. The first three days the tide was very low, making it more of a lying on the sand rather than actual snorkelling. The sun was out and my main challenge was to get to grips with overexposure, checking histograms and decreasing image brightness. The other main challenge is to not stir the sand up and create ‘marine snow’. It makes a world of difference to actually stick your head underwater and look through the viewfinder instead of lazily only submerging the camera. For now, I have only cropped and adjusted contrast of jpegs using Picasa, but I have also shot in raw format and hope to get more out of the shots in the near future. With help from the excellent Seasearch Guide to Seaweeds of Britain and Ireland and the Seaweeds of the NE Atlantic facebook page some of the species could be identified.

Above, Osmundea osmunda (probably), which has a very nice blueish (‘glaucus’) tinge (I need to take some close-ups of that next time). In the following photo, a whole tangle of species, mainly Hairy sand weed Cladostephus spongiosus, with Osmundea, Asparagopsis, Bonnemaisonia and Leathesia. Next, another picture of a whole variety of species, I would like to find out what the red epiphyte is. Below some photos of individual species of red seaweeds (mostly not great but it gives an idea of the diversity). First, Leafy rose weed Rhodophyllis divaricata, next Falkenbergia (which is actually not a species but a distinct phase in the life cycle of Harpoonweed Asparagopsis Armata), Berry wart cress Sphaerococcus coronopifolius, Irish moss Chondrus crispus, Beautiful fan weed Callophyllis laciniata, Under tongue weed Hypoglossum hypoglossoides,  Chondrus with Falkenbergia and Hypoglossum and Plocamium on top and a small unknown species. You can see that most photos suffer from overexposure (and notice my crude upped contrasts). 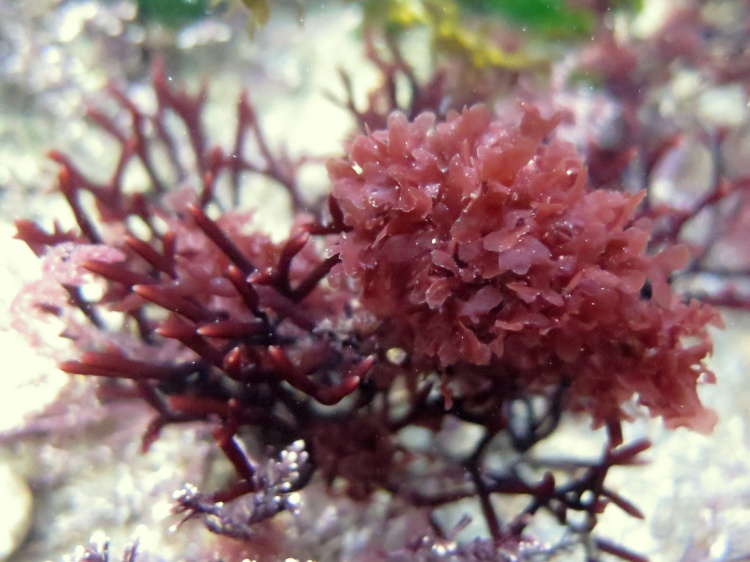 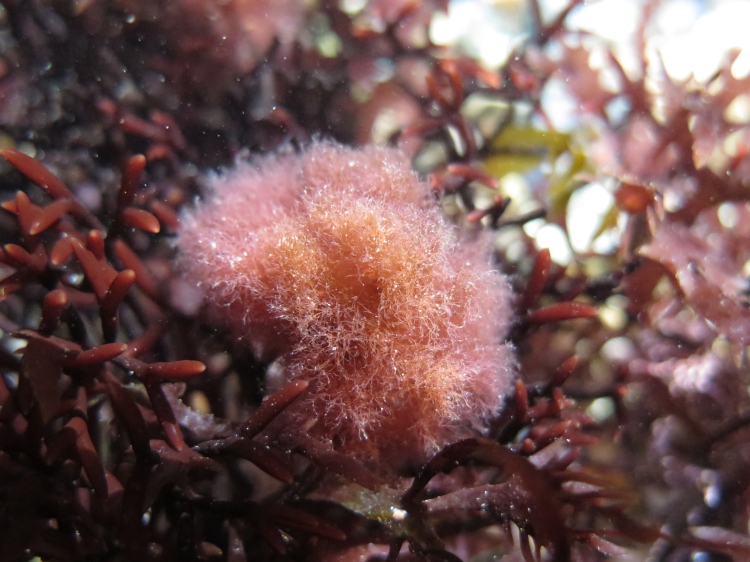 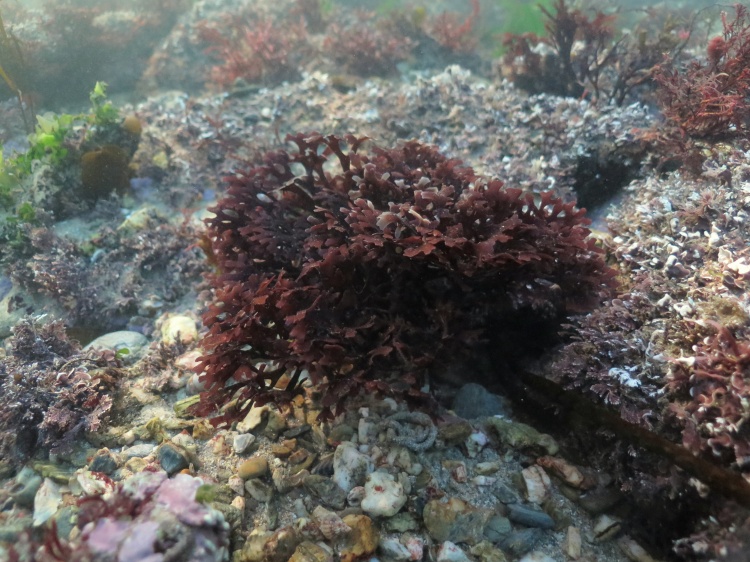 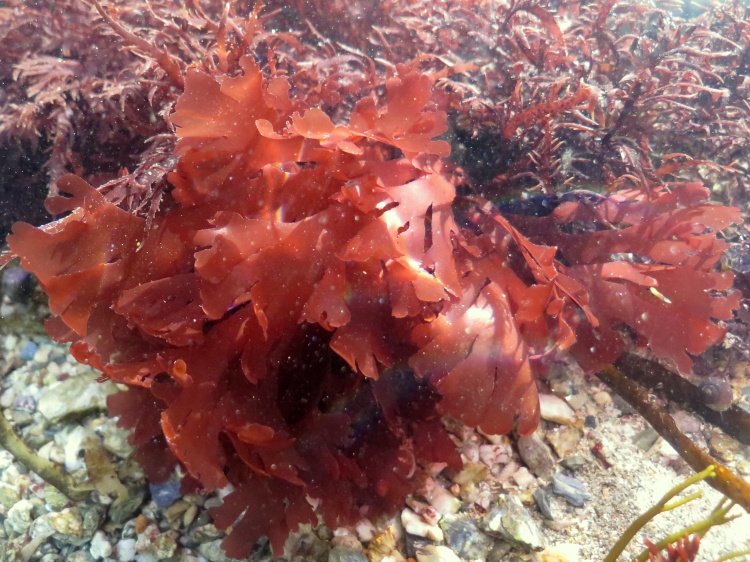 The last time I went snorkelling, it was overcast and the tide was higher. I tried a bunch of shots a greater distance away to capture more of an overall impression, but with more water between the subject and the lens the shots become ‘milky’. The next shot of a whole variety of red, green and brown species (with Clawed fork weed Furcellaria lumbricalis in the middle) could have been really nice with clearer water, better framing and correct exposure! The next shot shows Cladostephus and Thong weed Himanthalia elongata on top of a rock covered with Red grape weed Gastroclonium ovatum (also on the last photo). 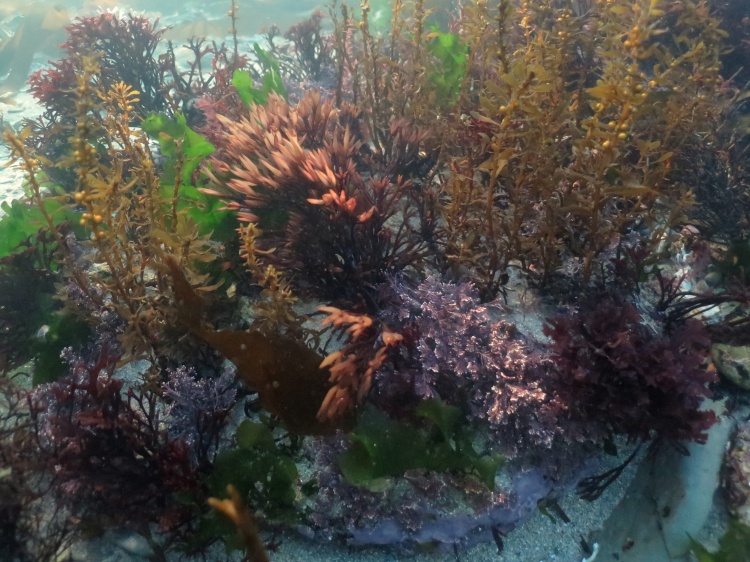 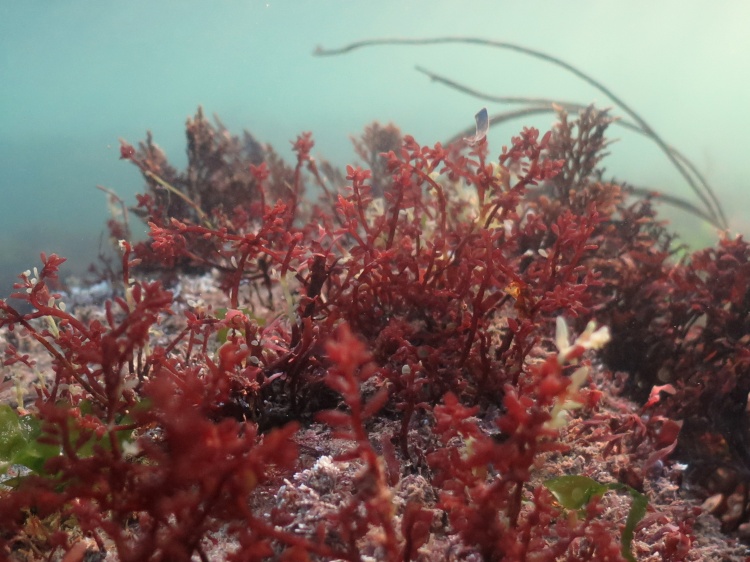