Another long time without a post. A lot has happened to the aquarium and some of what I post here is already outdated, but here goes. My Daisy anemone has buried itself and has not resurfaced but the Red-speckled anemone is growing well. I found the Dahlia anemone I was looking for, but lately it has been pestered by a Purple top shell, which has left a scar on its column, I hope it survives. The most dramatic event was that the Snakelocks anemone managed to kill my Sea scorpion (but not eat it, it was too large). This must have happened when I  removed some of the rocks, startling it and make it swim in the wrong direction:

Poor thing (although it had eaten 22 of my mullet so it works both ways I guess…). The good thing was that I could try keeping some other fish again. Using my net, I caught some Two-spotted gobies as well as a Common goby Pomatoschistus microps (I think, there are some very similar species) and a Goldsinny wrasse Ctenolabrus rupestris. The total tally from netting off the Flushing quay is now eleven fish species, not bad. The Goldsinny swims around the tank a lot and does some digging; it seems to be a more interesting fish to watch than the Corkwing:

The Plumose anemones Metridium senile are strange, they can be all shrivelled up for days, be short and squat or all extended. Here three pics of the same individual:

The Turban top shells Gibbula magus are very nice to watch (the Grey topshell Gibbula cinerarea gives a sense of scale). I found a Sea urchin Psammechinus miliaris and decided to try it out. It spends half its time under the gravel and pops up here and there with shells and pebbles attached to it. Let’s see what it does! Lastly a picture of the tank. I had attached a young Sugar kelp Saccharina latissima to the tunze pump with an elastic band and now it has attached itself to the plastic. 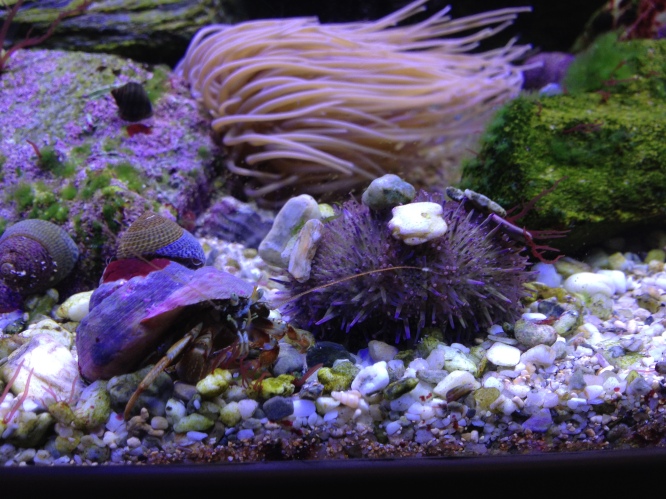 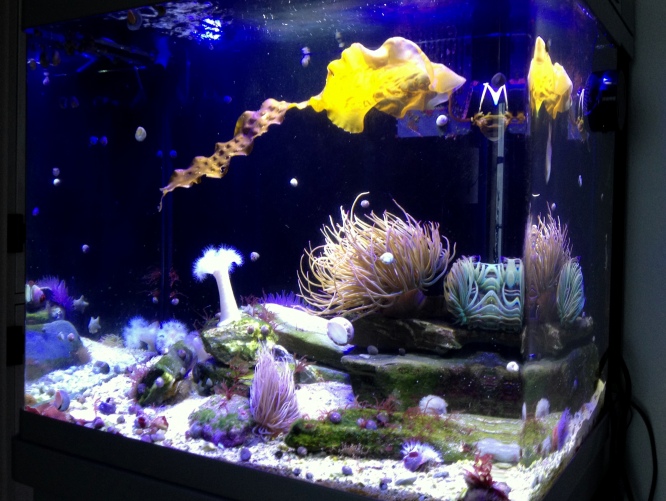 Hmmmm. After a promising start, disappointment has set in: algae spreading and seaweeds withering. To top it off: the Corkwing wrasse went missing; no dead fish to see but a noticeably larger Snakelocks anemone….After it managed to catch some prawns as well, it decided to split into two. I did managed to find a live Turban (or great) top shell Gibbula magus though and it seems happy (I do not have a good picture of it so see here.) I did some more fishing of the quay with my net and caught many small Corkwings and some Sea sticklebacks as well as a Long-spined bullrout (or Sea scorpion) Taurulus bubalis (see also here). The plan was to only keep them for a couple of days to then bring them to a local outreach event (see here for last years edition). I should have known better: the Sea scorpion ate about six fish overnight and so I quickly released the remaining prey fish…. 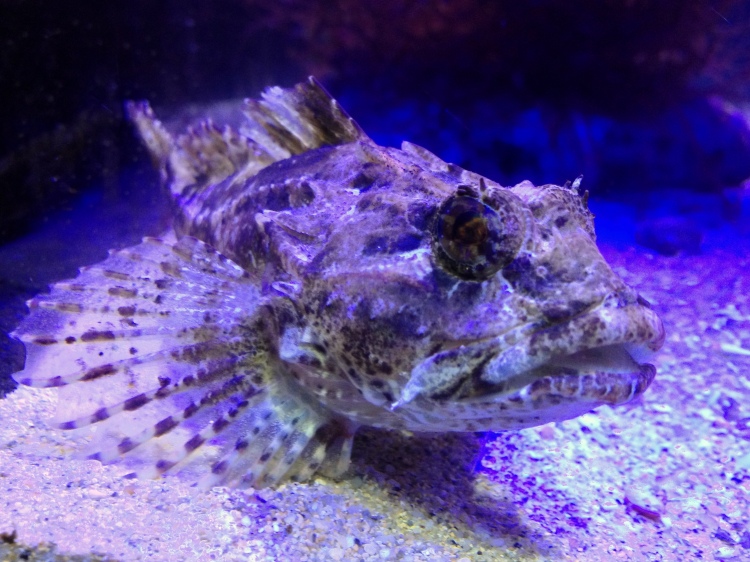 Keeping a healthy native aquarium is not easy, and I am making it myself a bit too difficult with all the seaweed experimenting. Perhaps I need to try something else? An anemone aquarium could be nice (although that would mean no fish or maybe just a Sea scorpion…). I found a link to a supernice Russian anemone aquarium (very cold, 3-8 degrees), check this out! The aquariums from the US West Coast that I see on the Coldwater Marine Aquarium Owners facebook group also look really nice. I need to get the Tunze going again, replace the Rowaphos, do a water change and start thinking what I want to catch…