Last week I went for a little swim at the usual spot at Castle Beach. The viz was nowhere near as good as last month, but still OK. There are schools of sand eels and sand smelt and I even saw an eel. The contrast between growing brown seaweeds and withering red seaweeds has become even greater. Below you see some yellowed Harpoonweed and a ‘forest’ of Thong weed covered in epiphytes. 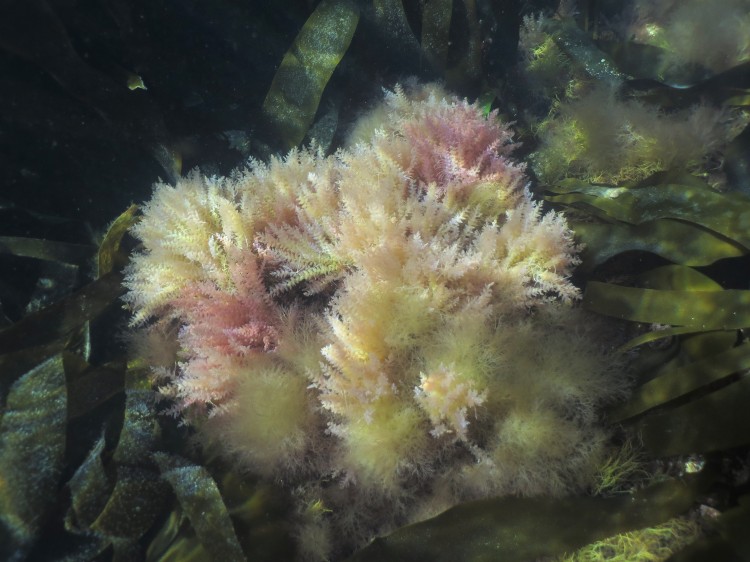 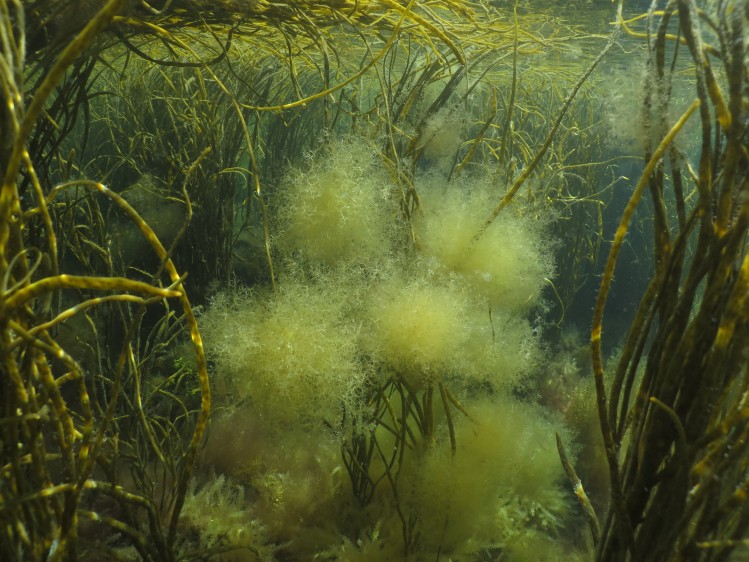 As the light was a bit subdued, I focused on the most shallow area. The bare parts of the rock are covered with barnacles, dog whelks, sting winkles and limpets. The seaweeds are mainly Serrated wrack Fucus serratus, Sea lettuce Ulva, Grape pip weed Mastocarpus stellatus, some Ceramium and Laver Palmaria palmata, as well as Dumont’s tubular weed Dumontia contorta. 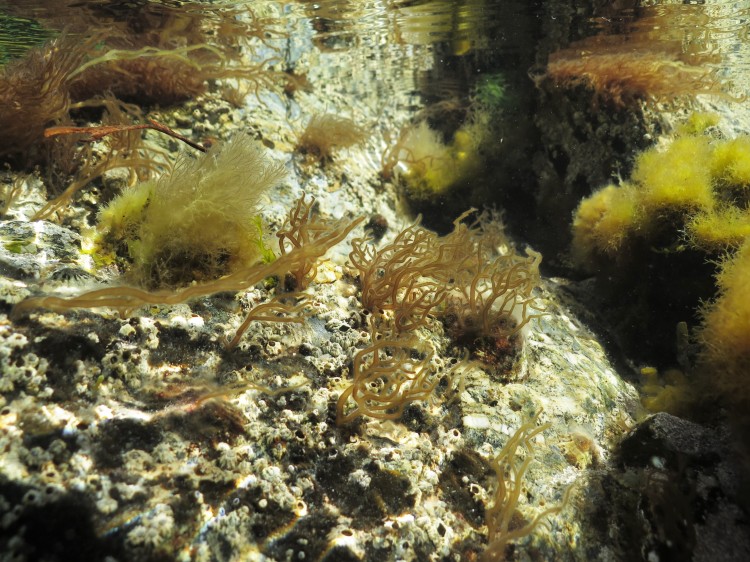 The last day of January I took an hour to explore a pool at the upper part of Castle Beach. The resulting shots turned out a lot better than they did the last time. As most of the pools are bare rock, there are no problems with sand/silt, but they are very shallow and on the receiving end of drainage pipes resulting in rain water mixing with the salt water, affecting visibility (this is not necessarily bad as it can make a photo more interesting). It was overcast and I did not experience problems with overexposure; I actually found that tweaking in Photoshop made the photos look worse. Below a Beadlet anemone Actinia equina, the most common anemone on rocky shores. They can be bright red or a drab brown (the green version is rare here) but have bright blue beadlets, or more technically acroraghi. These contain stinging nematocsysts used in territorial fights. After that a small Daisy anemone Cereus pedunculatus, which are usually more mottled in appearance (and not common here, or perhaps I do not know how to look for them…). 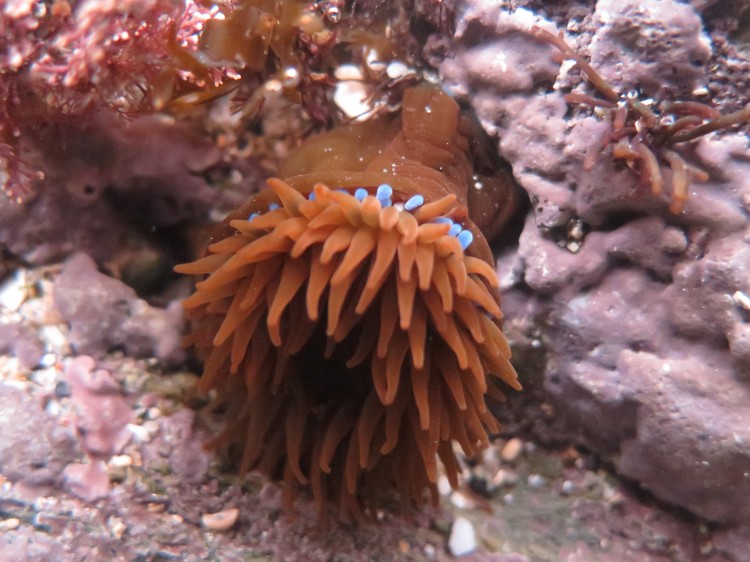 Next up, a red growth which I should have investigated further, I am not even sure if it is a sponge or something else. After that, a worn Thick top shell Osilinus lineatus,  a young Dumont’s tubular weed Dumontia contorta, a red Banded pincer weed Ceramium sp. happily producing oxygen and finally Patella limpets covered in Brown limpet paint Ralfsia verrucosa.

All right then, another post with me fiddling around photographing seaweeds. Composition remains difficult; the next four photographs illustrate this. The diversity of colours and shapes compensate somewhat for it though. I think that a wide-angle lens is crucial to get better pictures: you can get close to the subject (important, as the water is not always crystal clear) whilst still getting a ‘panoramic’ view. Cameras such as the Sony RX100 in an underwater housing can be combined with such lenses (‘wet lenses’ which go on the housing rather than in). Camera, housing and a macro and wide-angle lens will set me back £1000 or so though, so maybe not. In any case there is still plenty room for improvement with the simple Canon Powershot, preventing overexposure for instance. I use Picasa to add some contrast, crop and straighten btw.

Photographing through gulleys to create some depth makes things a bit more interesting (first picture). The second picture shows an overexposed background and a dark foreground but if properly exposed and in focus this sort of shot could be nice. Shots that are half reflection make things psychedelic and quite cool. This effect works well for Dumont’s tubular weed Dumontia contorta which is common highest up the shore (third picture). It is challenging to capture the beautiful blue-green colour of the Bushy rainbow wrack Cystoseira tamariscifolia as it is caused by iridescence, i.e. physical surface properties (see this old blog post from my work blog for some more info). It thus depends on the angle of view whether these beautiful colours can be seen. In the fourth picture you can see that the seaweed is a dull brown, but its reflection underneath the water surface does reveal the blue colour. The last picture demonstartes the different colours and textures well, but it is overexposed unfortunately. 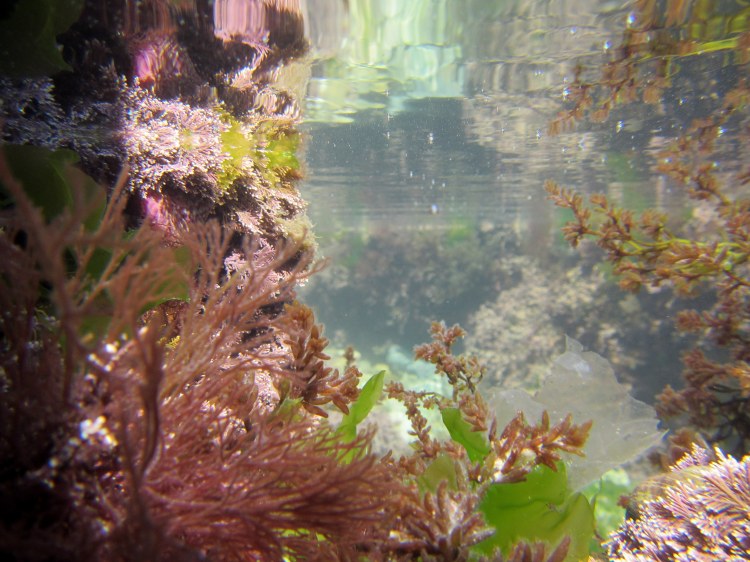 The weather was terrible last weekend so I only went for a brief trip to Flushing beach. It was noticeable that the Dumont’s tubular weed Dumontia contorta, abundant during the last months, is disappearing and flat red and green seaweeds are on the increase:

I found some Bushy Berry Wrack Cystoseira baccata (I think) and a very fine red seaweed that I could not identify using my Seasearch Guide to Seaweeds of Britain and Ireland:

My main aim was to get some finer sand to replace the coarse, white gravel collected from Maenporth beach that I have in my aquarium now. This sand is formed for a large part by remnants of Maerl, species of coralline algae. Beds of Maerl nodules are a threatened and important habitat for many animals and also other seaweeds.

I had to remove the False eyelash weed from the aquarium; some bits were looking fine but in general a substantial amount of the branches had died off. Perhaps this is what normally happens in nature, only in rock pools any dead material is quickly washed away and so it goes unnoticed. I had to make some water changes to get rid of the debris which required some healthy exercise bringing buckets of waters down from the quay. Although it was windy and cold, I could not resist the urge to have a look at my local beach in Flushing last Saturday, hunting for some more seaweeds. It was noticeable that one particular seaweed had started to grow everywhere: Dumont’s tubular weed Dumontia contorta:

Slightly slimy and impossible to remove from the rock without ending up with a hand of loose strands. I therefore have placed a large pebble with one small plant in the aquarium just to see how it goes. I found small plants of Solier’s red string weed Soliera chordalis again that did well in the aquarium last year, as well as a whole bunch of other red seaweeds that I have trouble to identify (not the first one, that is Bunny ears Lomentaria articulata):

To test whether they are able to grow in the aquarium, I have placed them in an old floating fish fry box I had lying around: