The weather was not great last weekend and we were too late at the diveshop on Saturday to be back in time to get the tanks refilled for a dive on Sunday but the one dive was (as always) worth the effort! We took dive buddy Chris’s boat from Loe Beach in Feock over to the other side of the Fal Estuary (between St. Just and St. Mawes) to explore the Maerl beds. See an earlier post on a snorkel trip to see this bed of ‘Cornish coral’ for some more background information. After the usual faffing about with equipment on board we plunged in the water. I took a single photo of the boat which turned out quite dramatic: 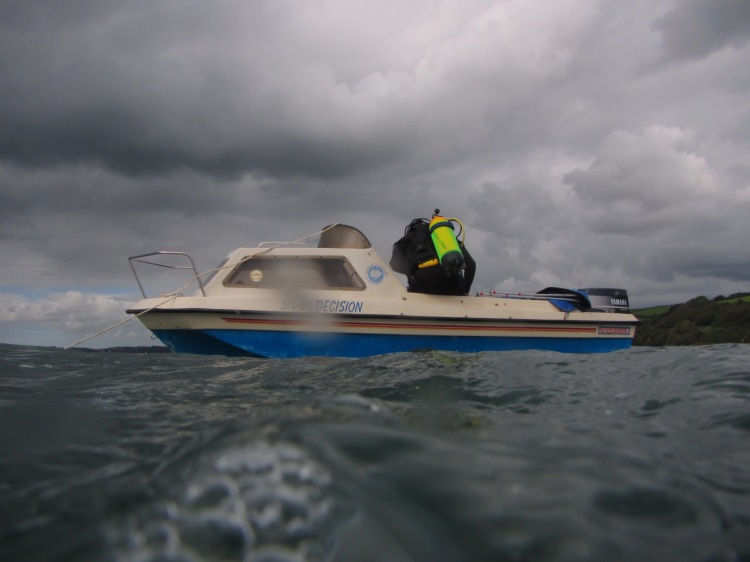 Although we were diving 1-2 hours before high water (the best time, as clear seawater is pushed in the estuary), the visibility was quite bad. After going just a couple of meters down, fields of maerl loomed into view (the dive was really shallow, 5.9 meters max I think!). There were quite a lot of Thornback ray Raya clavata egg cases (foreground first picture) but we did not see the rays themselves. There are two main Maerl genera around here, Phymatolithon and Lithothamnion but their growth forms are varied and there are other encrusting Pink paint weeds that could look similar. We saw a number of golf balls that were completely covered in coralline algae, quite cool. 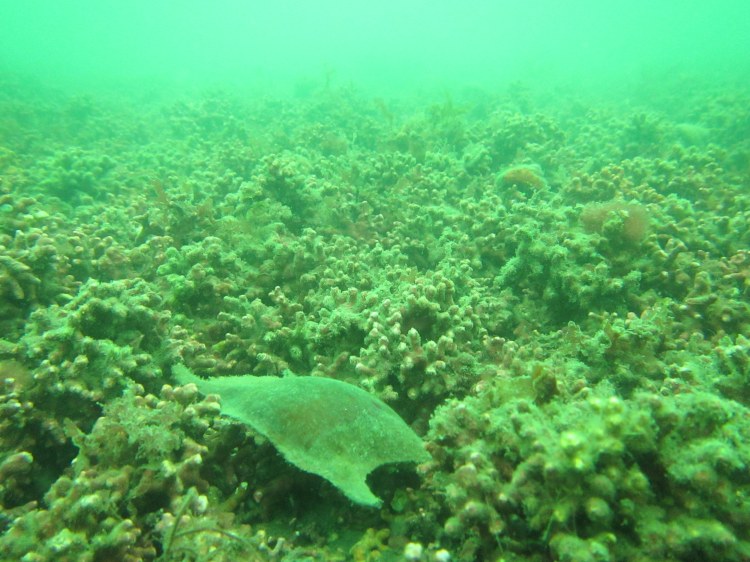 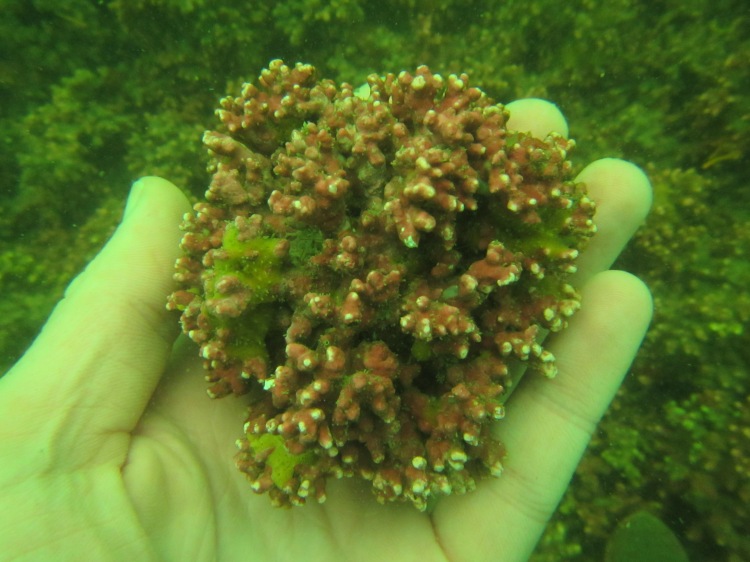 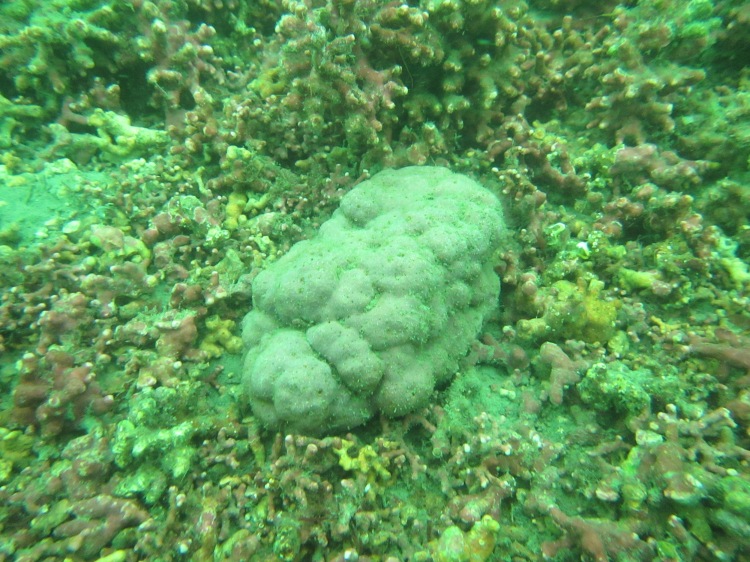 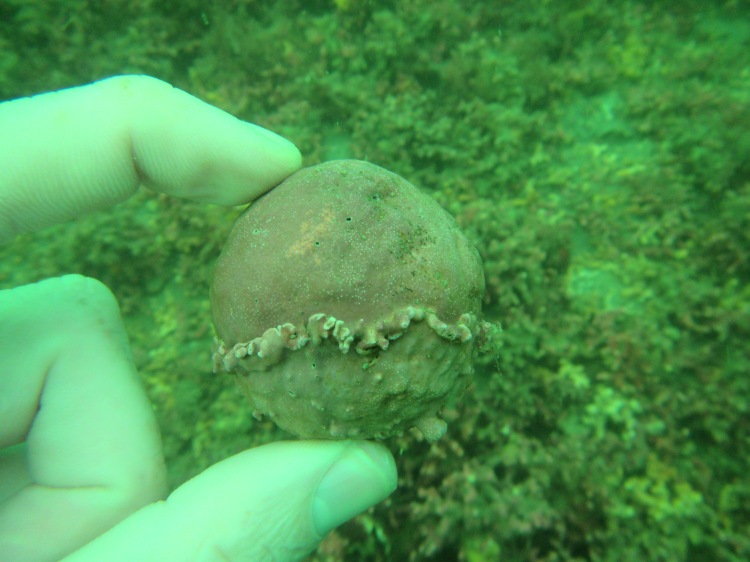 We saw a couple of *very well* camouflaged crabs sitting about. They were completely covered by sponges, coralline algae and seaweeds. There are a number of crab species shaped like this but most of them seem too small. Best guess is ththe Europan spidercrab Maja squinado in a particular extravagant mood. There are lots of little things hiding in the Maerl; gobies (rock gobies I think), squat lobsters, swimming crabs, hooded prawns and things that hide faster than I can identify them. I noticed a dainty little prawn sitting about which is probably Thoralus cranchii, although it could also be Eualus occultus (second picture is cropped). 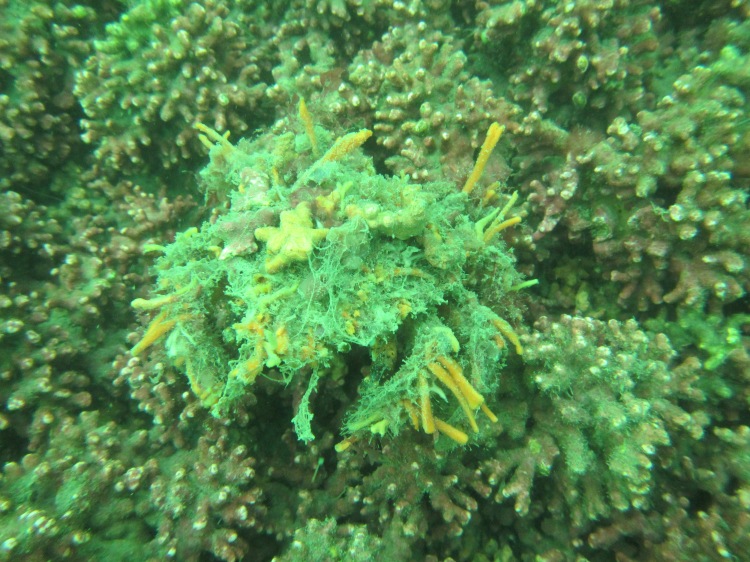 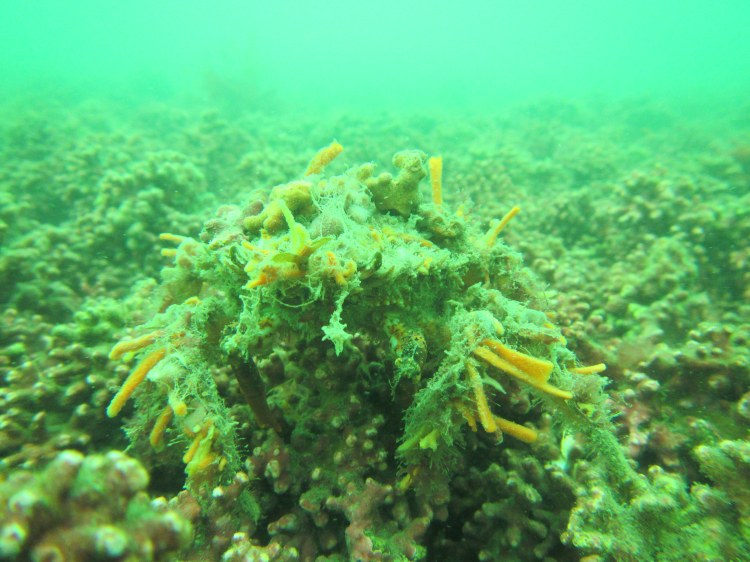 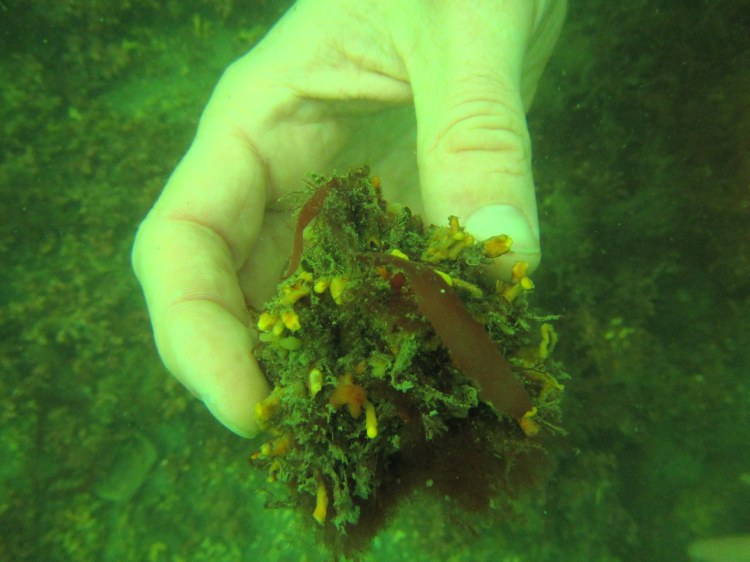 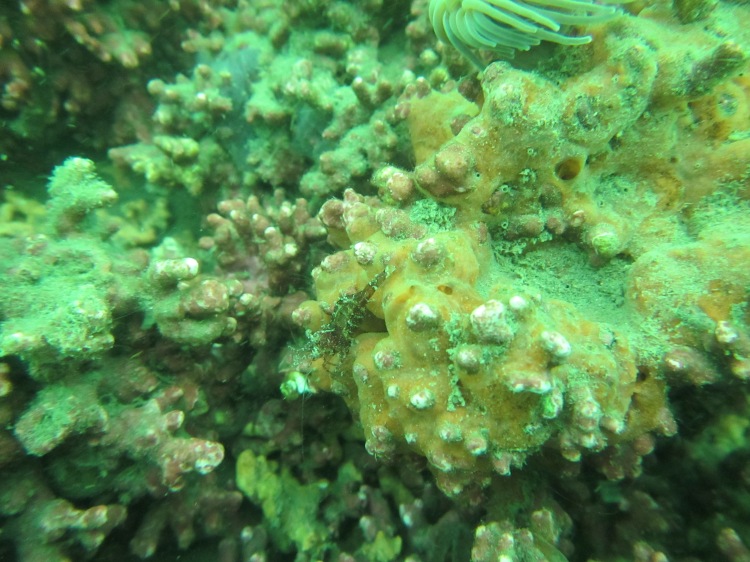 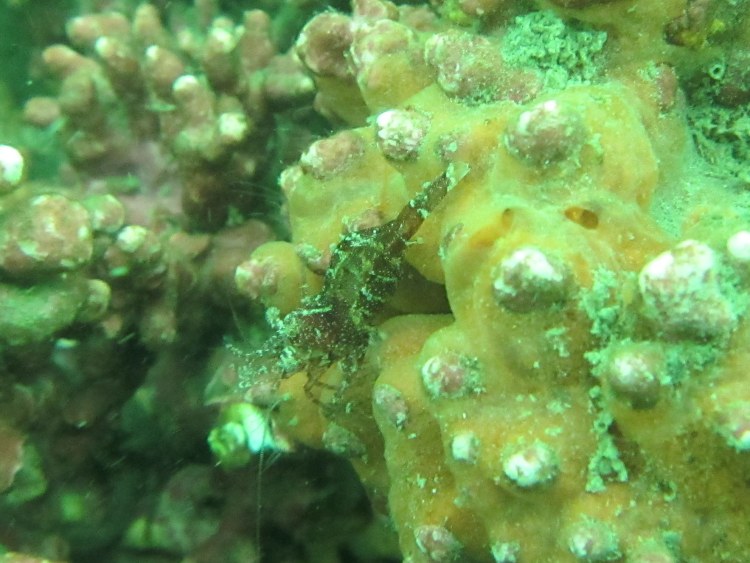 Swimming crabs were common and probably mostly were the Harbour crab Liocarcinus depurator. The first picture was the only one with flash and shows the Maerl colours a bit better. The second photo shows a Velvet swimming crab Necora puber under a snakelocks anemone sitting on top of a bottle. This species can be very commonly seen rockpooling. Lastly an empty shell of the largest European sting winkle Ocenebra erinaceus I have seen so far and probably the largest sponge I have seen so far too (with a human head for scale). 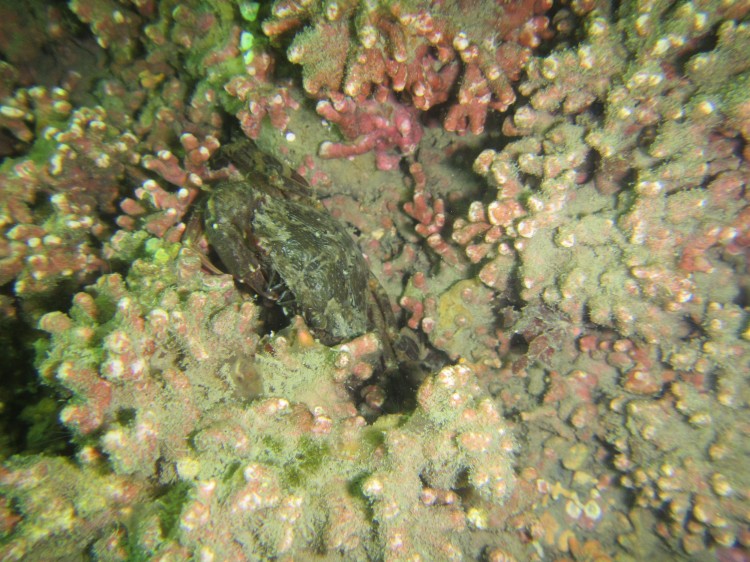 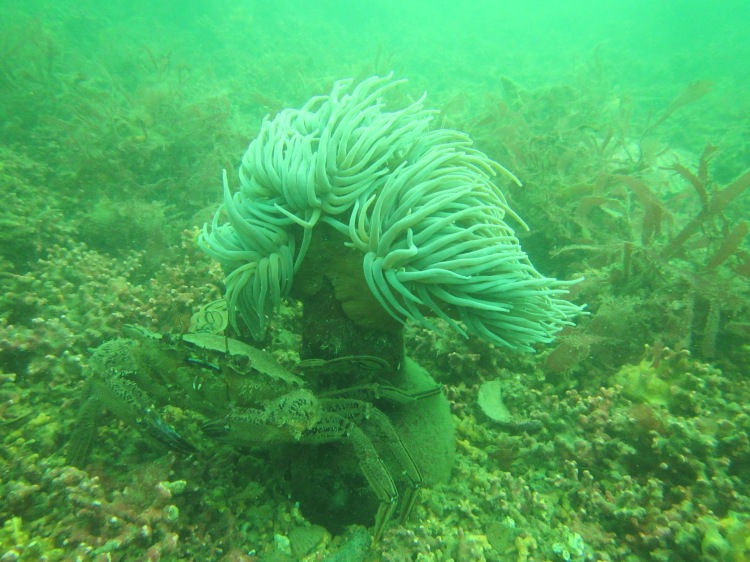 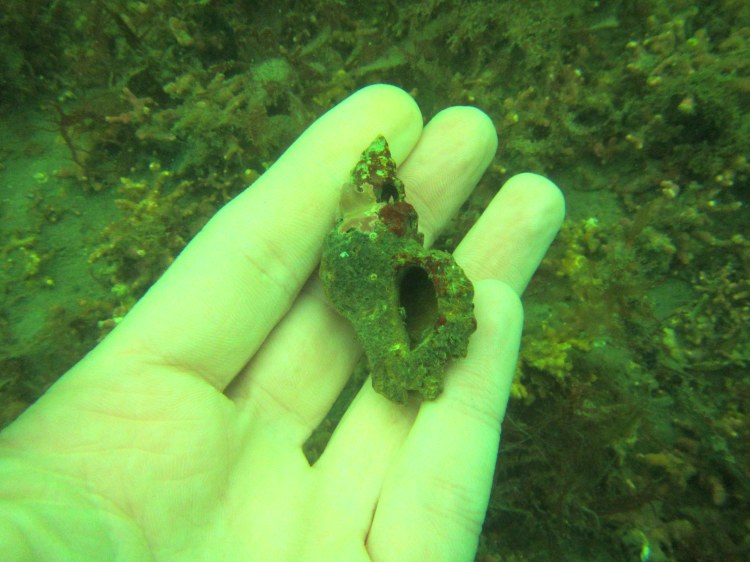 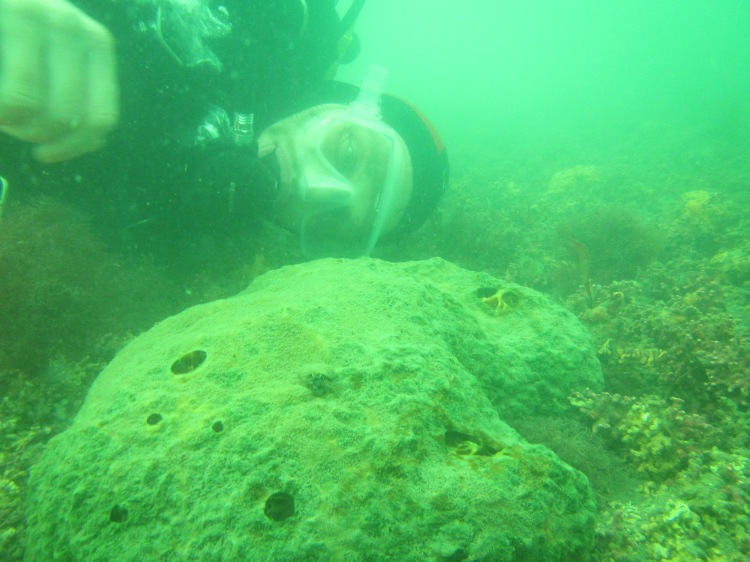 Another small post. I went out to the marina in Mylor Harbour to check what the pontoons looked like. It turned out OK-ish but no Peacock worms and only a few little Plumose anemones. However, the trip was worth it solely by the find of a hydroid colony, which my Seasearch guide told me was the Oaten pipes hydroid Tubularia indivisa. Very pretty! By taking 30 photos with my Canon Powershot, I ensured I had a couple in focus. Also in the frame some little Sycon ciliatum sponges (these are a lot more rounded than some of the others I have seen, see here). 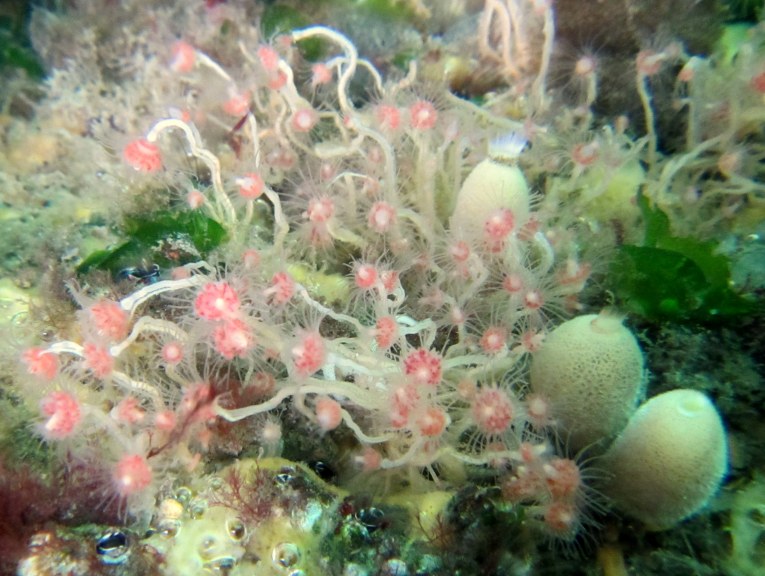 I have previously posted about exploring the more muddy sites in Flushing’s Penryn River and also about catching fish with a net from the quay (here and here). This weekend had a good tide and I decided to combine the two by climbing down from the quay with my net. No blue water and clear, colourful rock pools but black mud, waste from fishing boats and in general a lot of crap, not a pretty sight/site! Mussels and (native) oysters, rock gobies, fan worms and estuary sponge are common here. Lifting one piece of waste, i found a juvenile Eel Anguilla anguilla, which was impossible to grab and place into my cuvette for a proper photograph. One cool find were bundles of squid eggs (no idea about the species). I also found tangles of the sponge Sycon ciliatum, which before I had only seen as individuals hanging from seaweeds (see here). Also visible are some Leucosolenia botryoides sponges. 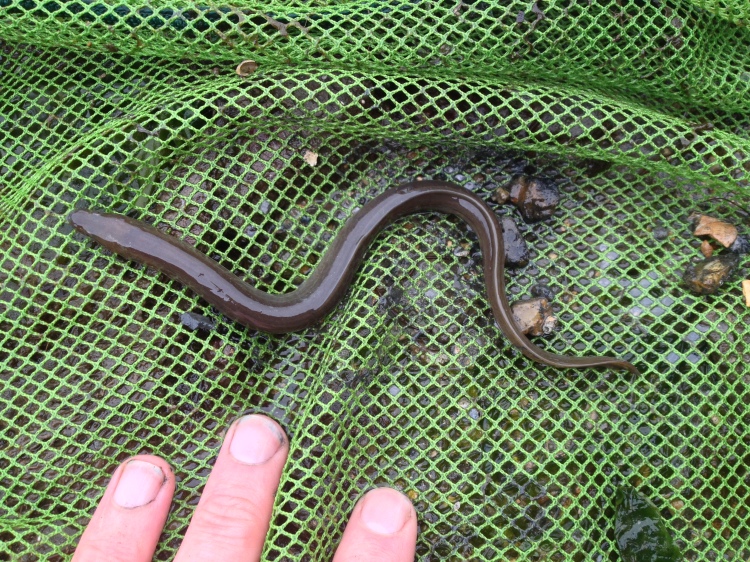 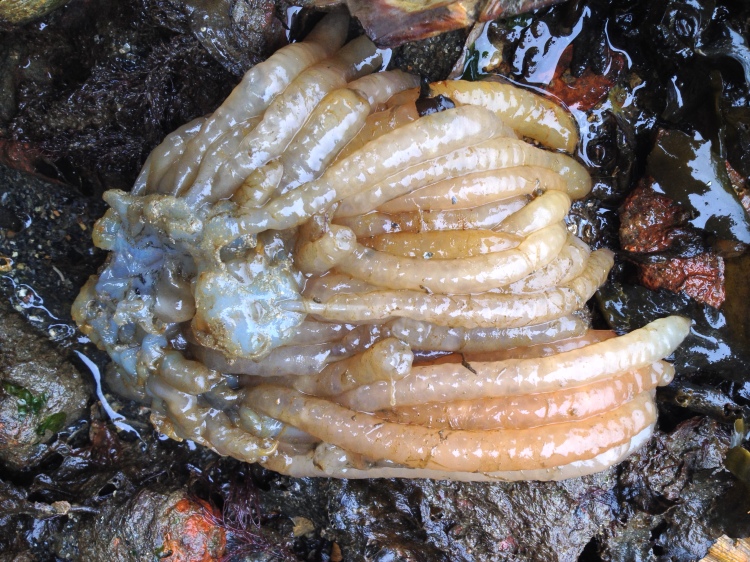 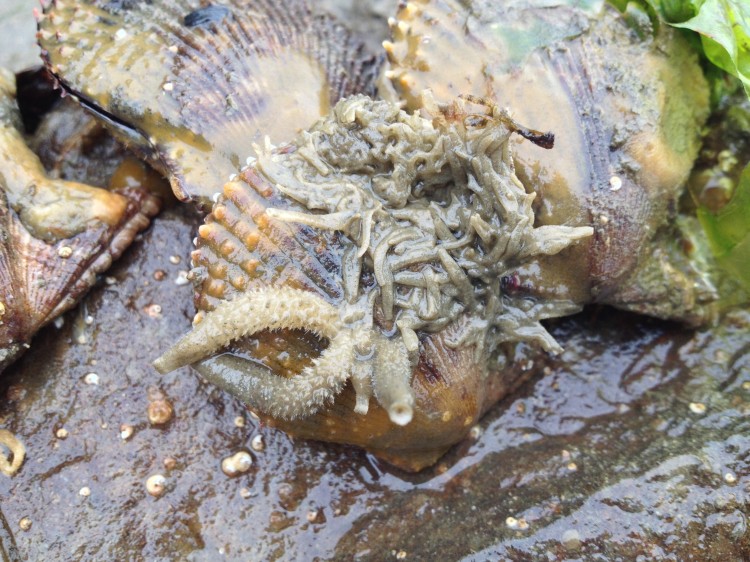 There was a heap of discarded scallop shells; I noticed they were covered by large Balanus balanus barnacles as well as the soft coral Dead man’s fingers Alcyonium digitatum (I had never seen this before but this could only be one thing!). The lower parts of the quaysides were covered in estuary and breadcrumb sponges and especially in droopy Morchellium (or Aplidium?) sea squirts. Although generally an ‘ugly’ habitat with lots of waste to boot, still plenty of interesting finds. 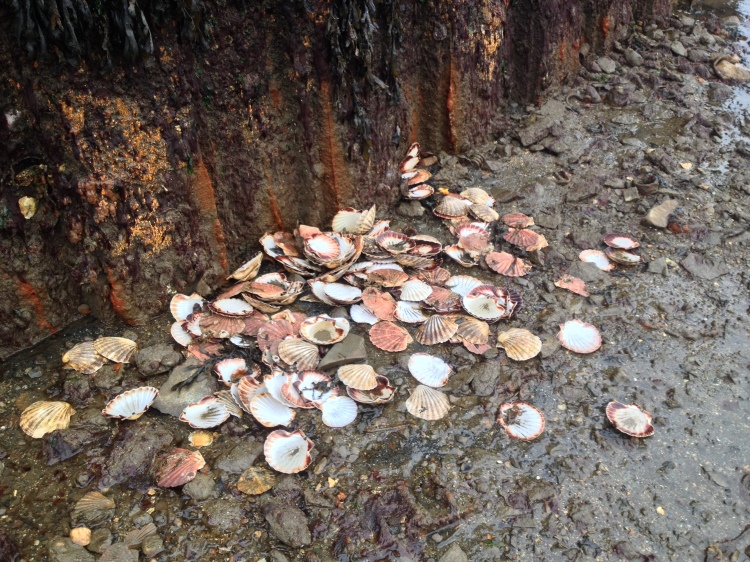 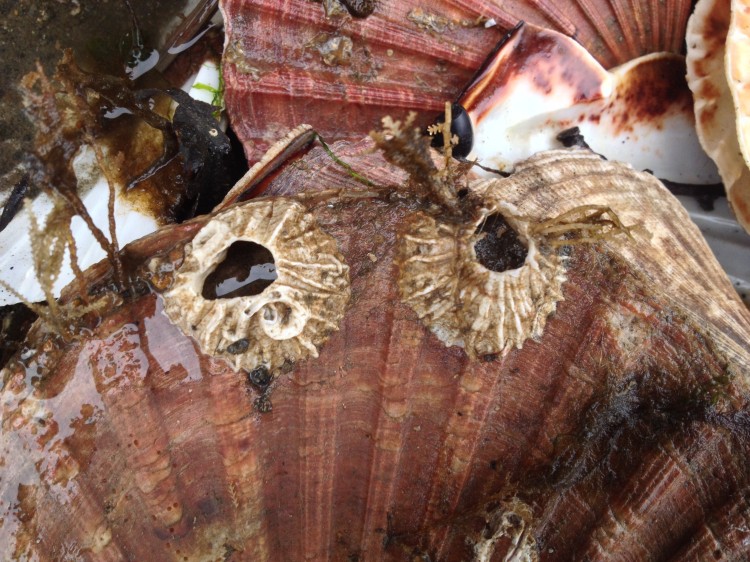 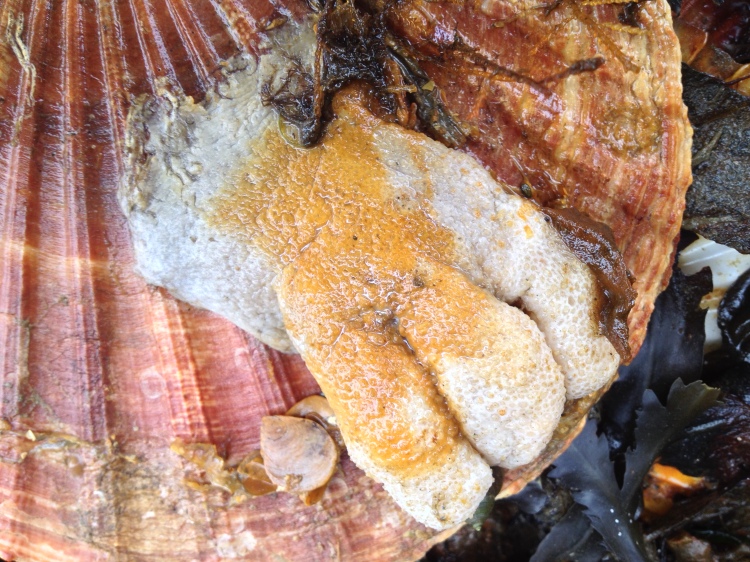 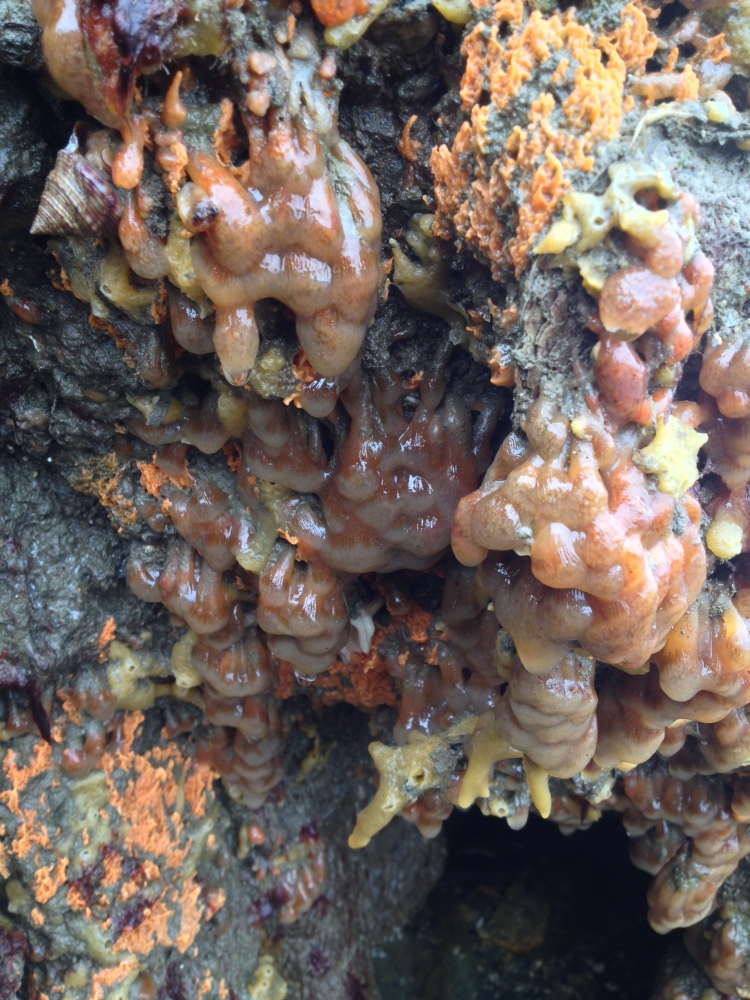 On to some of the more tricky species to identify. The rock overhangs, the home of the Painted top shells, are covered in sponges, tunicates and bryozoans. These are organisms I need to spend some more time on, as they are diverse, pretty and easy to photograph (they do not scurry away or give any macro depth-of-field problems). First two pictures of the large, nicely textured sponge Ophlispongia papilla. After that, the cream-coloured sponge Dysidea fragilis and the yellow sponge Aplysilla sulfurea. Side-by-side the bryozoan Disporella hispidata and what might be the sponge Clathrina coriacea. 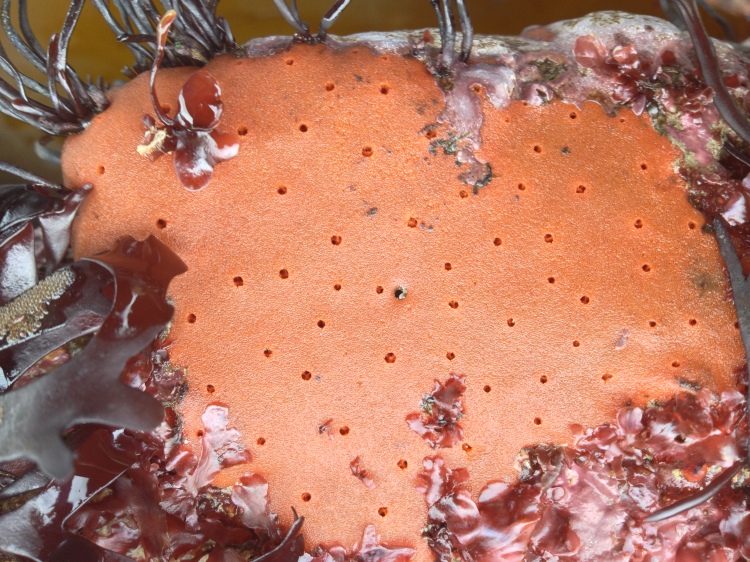 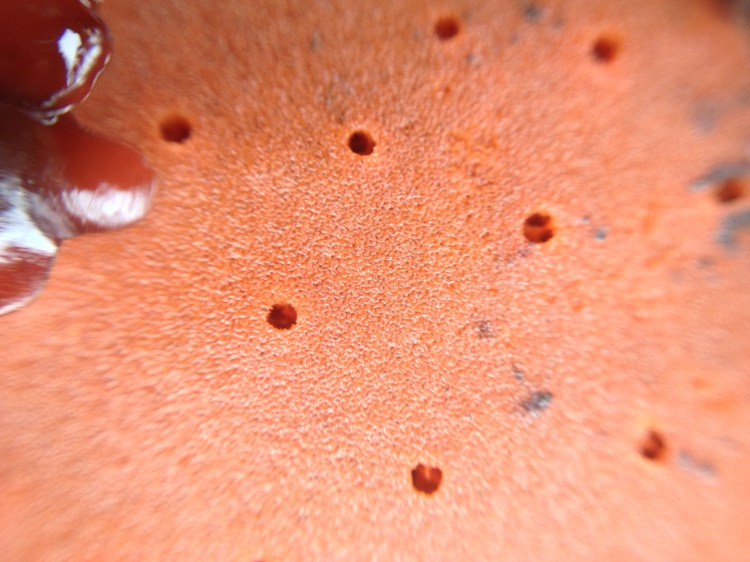 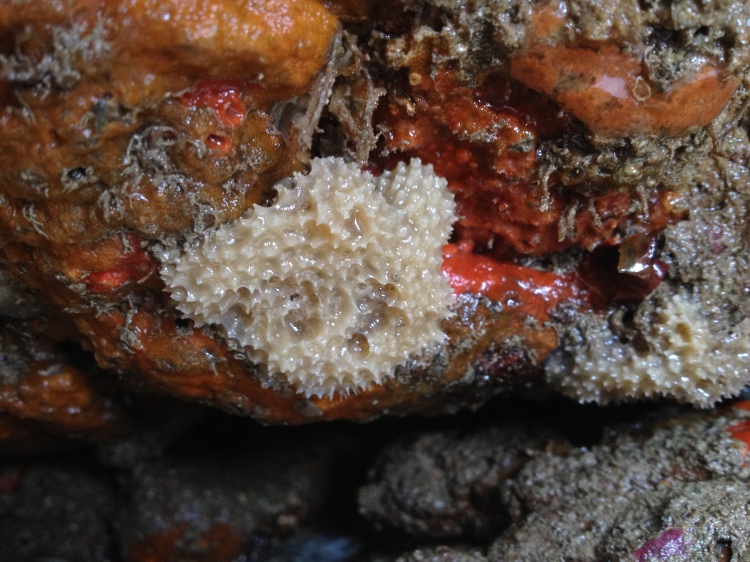 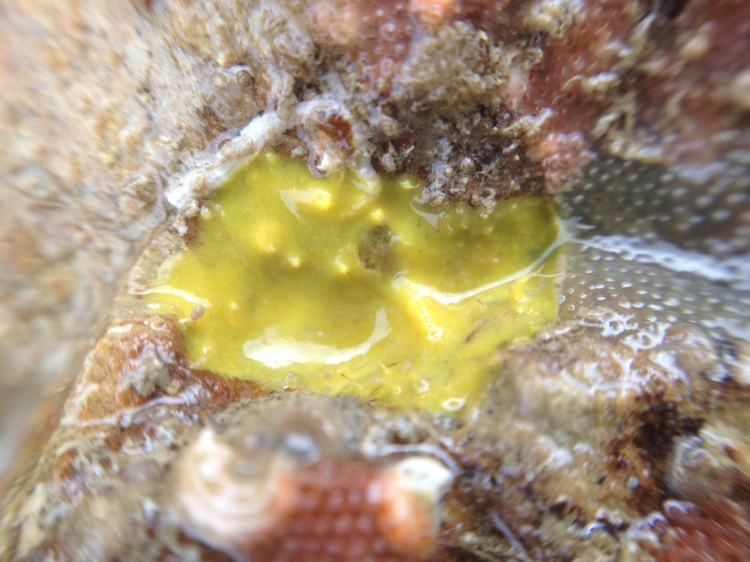 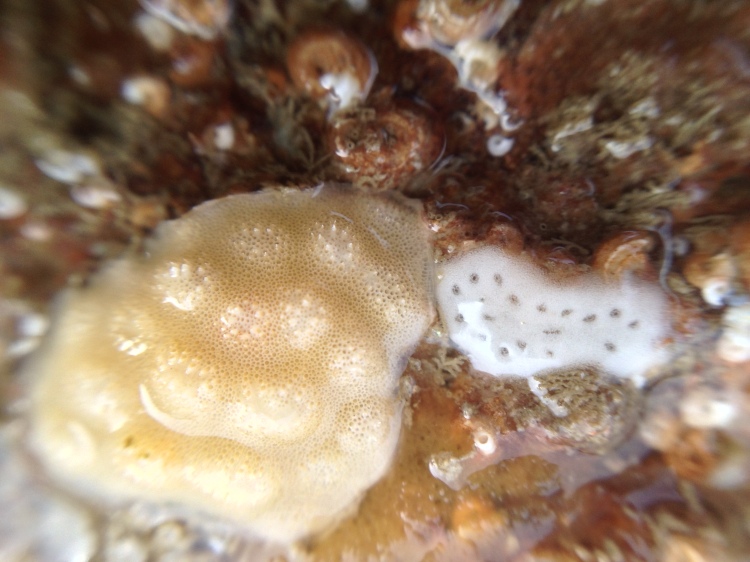 There were quite a lot of other sponges and bryozoans to see as well, so I’ll definitely investigate more the next low tide. Some other species: the tiny polychaete worm Euphrosine foliosa (first two pics). Next, Chaetopterus variopedatus, a quite large polychaete worm (thanks to David Fenwick for the ID), a tiny glossy bivalve Kellia suborbicularis (thanks to David again) and what is probably a Chameleon prawn Hippolyte varians. 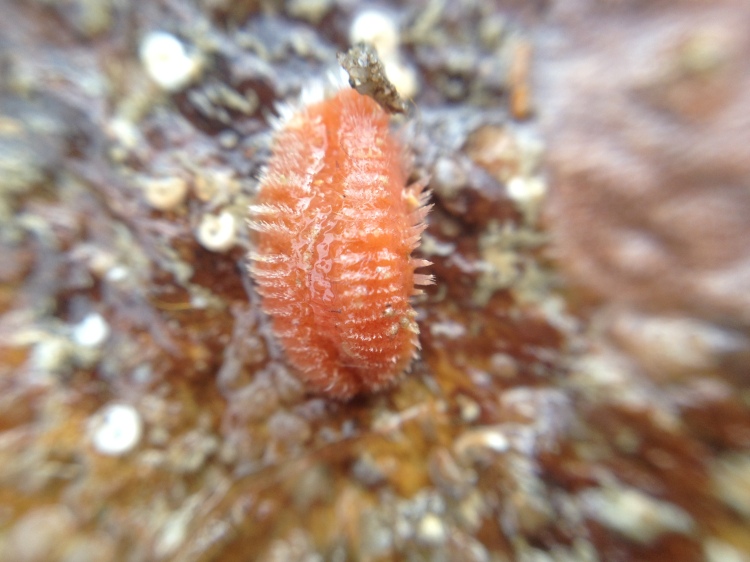 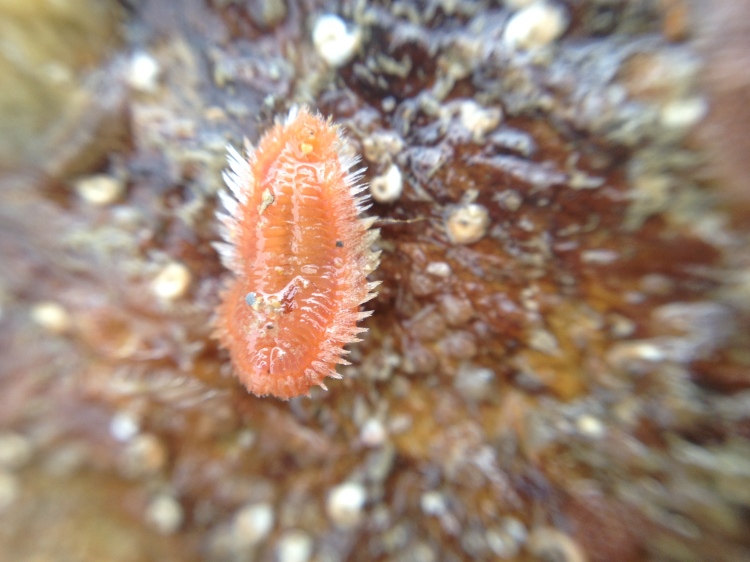 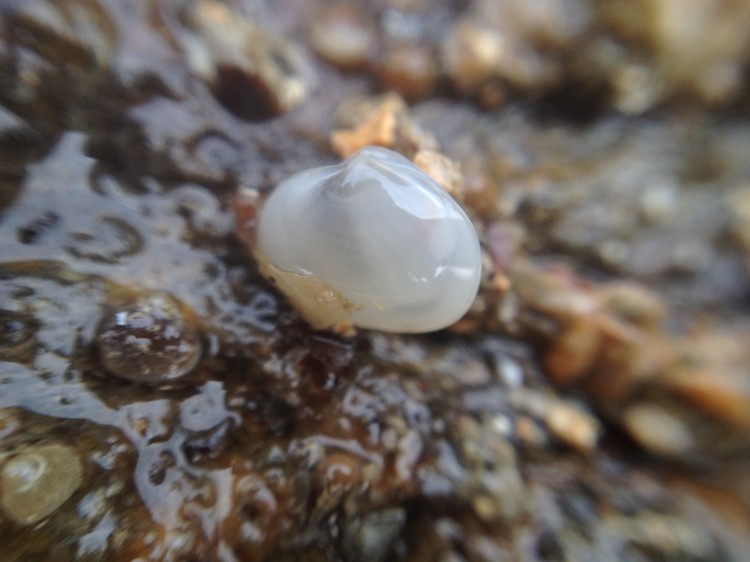