A quick post as it has been a while…..Last Sunday we went on a walk on sunny Carne Beach on the Roseland Peninsula. The primary aim was to get some fresh air, the second to find some dahlia anemones to bring home to the aquarium (we succeeded in that) and the third to do a bit of beach combing. Nothing much washed up, but we did find a number of live Necklace Shells (Euspira catena). These gastropods hunt bivalves in and on the sand; if you see shell valves with a neat little hole in them, you know they were victims of this predator. They are name after their necklace-shaped, sandy egg capsules (see here).

This one is about as big as they get. Their cousins in the North-East of the Pacific Ocean (Euspira lewisii) are something else though, take a look at this! 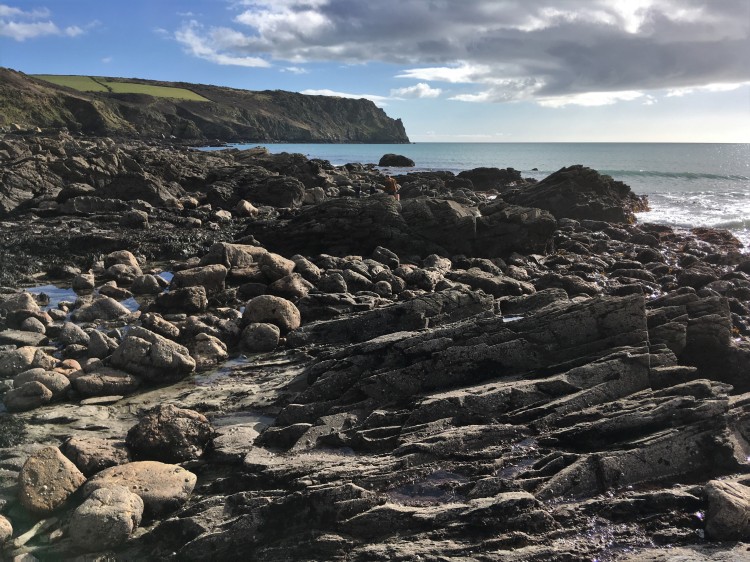 I have not been tempted to go back snorkeling yet, but had an hour of nice rockpooling last Saturday, at beautiful Carne Beach on the Roseland Peninsula. I had been here only once before, and found my first stalked jellyfish then. The stalked jellies (Haliclystus octoradiatus) where still there, in different colours: brown, yellow and grey (I will keep to my resolution to record my findings from now on, when I find the time). My old trusted iPhone 4S finally gave up the ghost last week so I upgraded to an iPhone SE which proved a real upgrade. (I was too lazy to bring out the Canon G16 in the underwaterhousing, which would not have been much use anyway as the pools here are very shallow.) The pools were teeming with (mating) polychaete worms and there were many juvenile Sea hares about as well. I saw whole mats of pink wriggling tentacles sticking out of the sand, something I had never seen before. These (most likely) belong to the worm Cirriformia tentaculata, quickly identified by David Fenwick, see here for very good photos of the whole animal on his aphotomarine site in addition to the rather bad snap here.

I found a hermit crab inhabiting the shell of a (juvenile) pelican’s foot Aporrhais pespelecani, a species that shares the sandy beach with the razor clams that were washed up all around. The highlight for me were the anemones. Snakelocks and strawberries were common, and in addition to red Beadlet anemones, there were green ones as well (I never see these in Falmouth). Some pools at the edge of the rocks and the beach were filled with Daisy-, Gem- and Dahlia anemones. I am ready for some more seaside adventures, but the weather is rarely cooperating these days. More on the blog soon I hope! 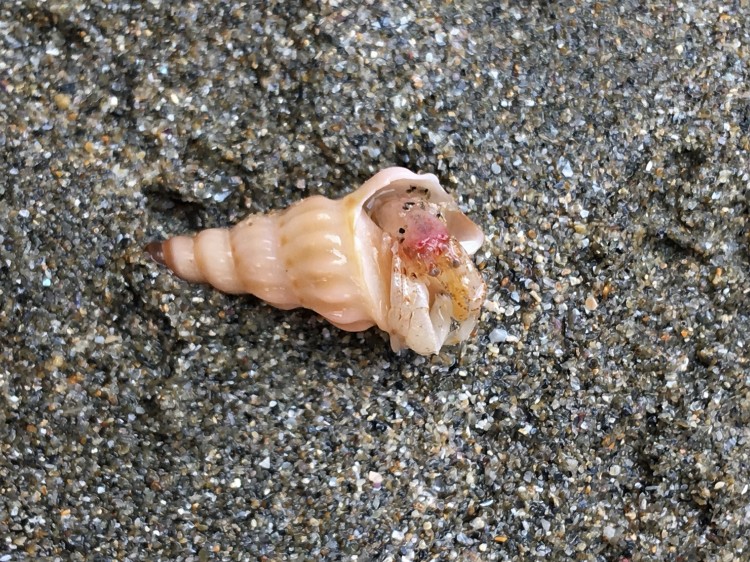 Back at Carne Beach on the Roseland Peninsula. No time for a good rock pooling session, but a nice walk along the beach revealed some nice surprises. Amongst the Laver and Furbellows lay Common starfish, Pod razorshells, Striped venus, Banded wedge shells and Rayed trough shells. A first: the Masked crab Corystes cassivelaunus (a female): common offshore buried in the sand, and usually only seen when washed up dead on the shore as is the case here (next to it a Sea apple). Also a beautiful piece of Sea beach (or Sea oak? the margins seem not ruffled enough though…). Finally, a Barrel jellyfish Rhizostoma pulmo, remarkably firm and heavy. This is a small one, about 20 cm across; 40 cm is normal and occasionally they grow to more than a meter in diameter, making it the largest jellyfish species in British waters.

A trip to Carne Beach on the Roseland Peninsula, east of Porthscato and west of Nare Head. The beach is facing south and the sun was so bright that my iPhone pictures were all overexposed, but I’m not complaining in February! I did not have time to go rock pooling much longer than ten minutes, but in this time, I managed to find Stalked Jellyfish, as described in the previous post. Some very nice rock pools to the east of the beach (the pools to the west where the beach is called Pendower looked even better). On pretty much every Slender wart weed Gracilaria gracilis plant I found a Spotted kaleidoscope jellyfish Haliclystis octoradiatus (see stauromedusae.co.uk for all things stalked jellyfish). I also found a smaller, red species which David Fenwick ID’d as a Lucernariopsis campanulata (last two pictures). I will now keep my eyes out for these beautiful little creatures as their biology and distribution are not well-known and record my findings.