I joined a seaweed identification get-together at the Cornwall Wildlife Trust organised by Matt Slater last week. It was fun to chat with likeminded people and also made me want to stick my head underwater again! The weather has been horrible for over half a year now and I have been in only a few times, with little chance to take decent photos, hence the blog inactivity. This has been especially frustrating as March is the best month for seaweeds (see the 2017 Falmouth Seaweeds tag) and I am missing my window. I therefore jumped in the next day. The tides were at their very lowest, actually too low for most of my usual rockpool spot! The viz was not great due to the 20+ mph winds but just about good enough for the fisheye lens. I really hope for some good weather in the next 2-3 weeks to be able to make the seaweed photos I really have in mind. 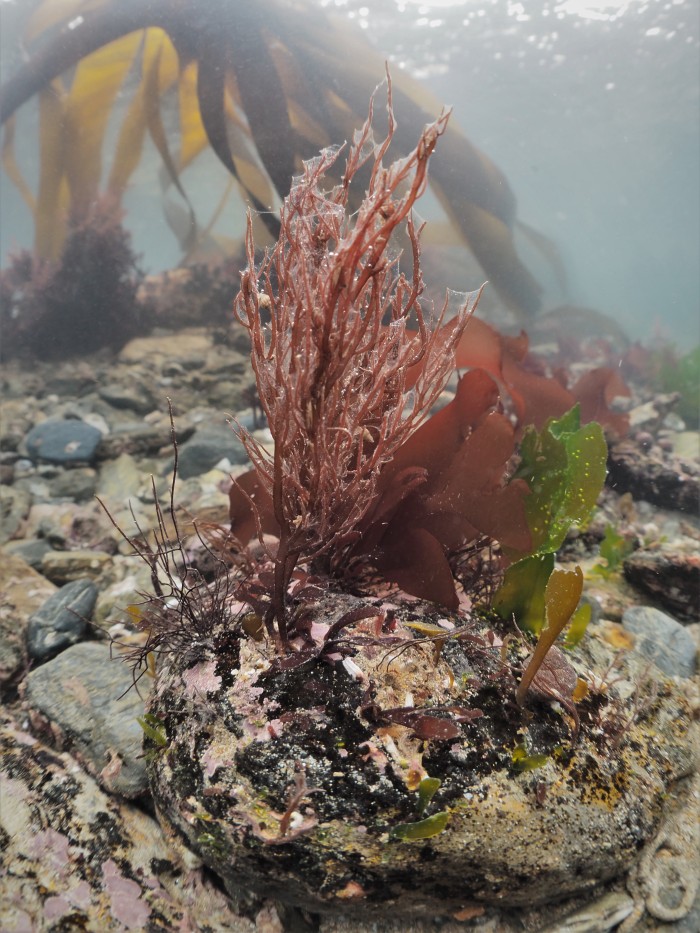 The very top photo is Berry wart cress Sphaerococcus coronopifolius shot with a very shallow depth of field. The single stone above hosts a whole variety of species. The largest is Slender wart weed Graciliaria gracilis and just as the Berry wart cress it is covered in mucus threads, which must come from the tiny gastropods Rissoa parva that can be seen on it when you zoom in. To the left the wiry Black scour weed Ahnfeltia plicata. To the back the invasive Devils tongue weed Grateloupia turuturu. Green Ulva and young kelp can also be seen. Below some Harpoonweed Asparagopsis armata. The snakelocks anemones Anemonia viridis were also out in force. I hope the weather settles soon! 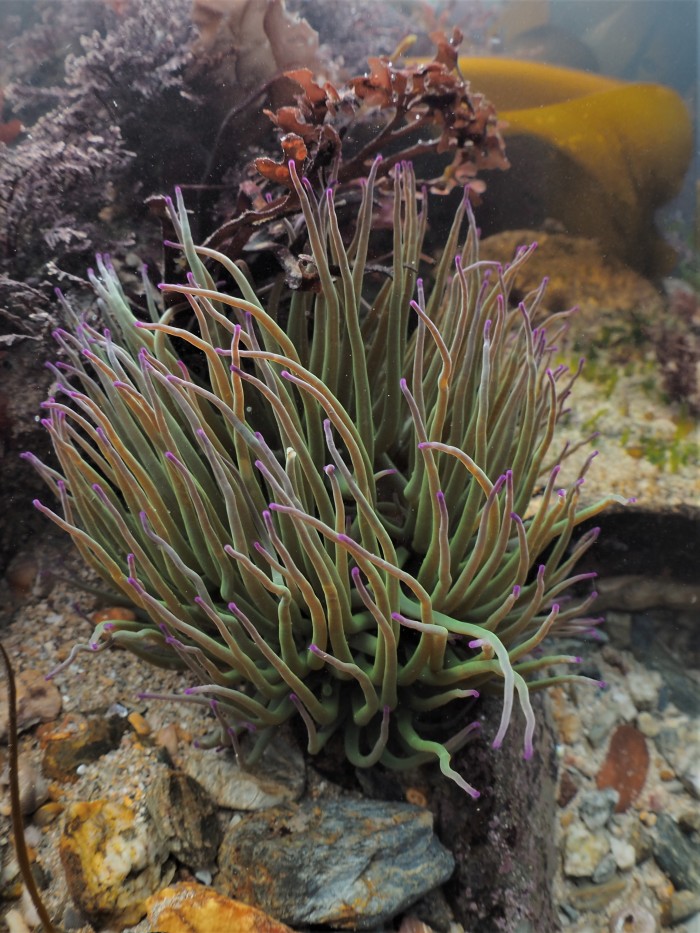 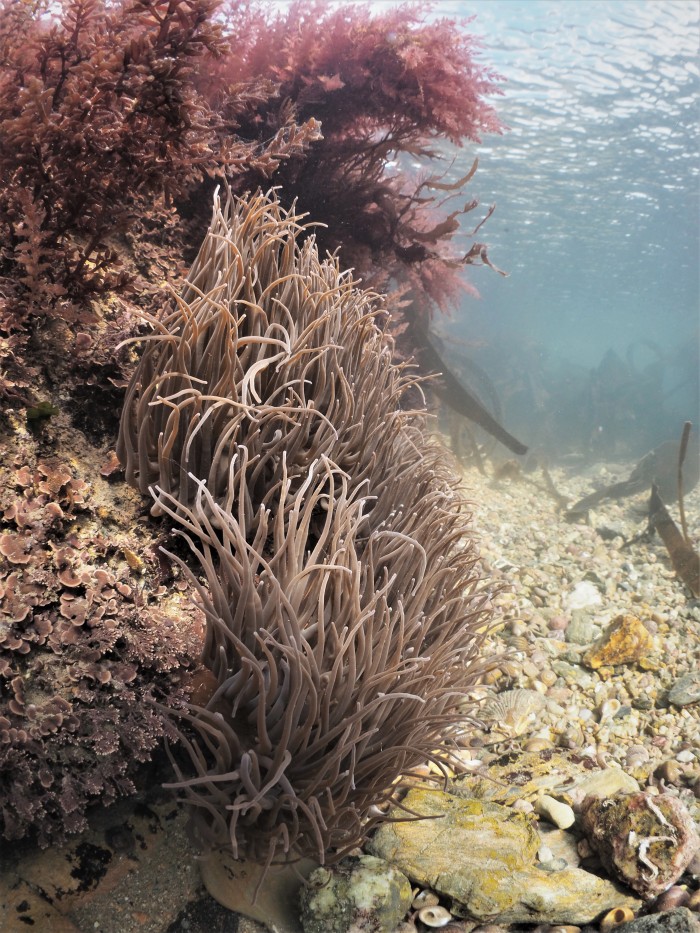 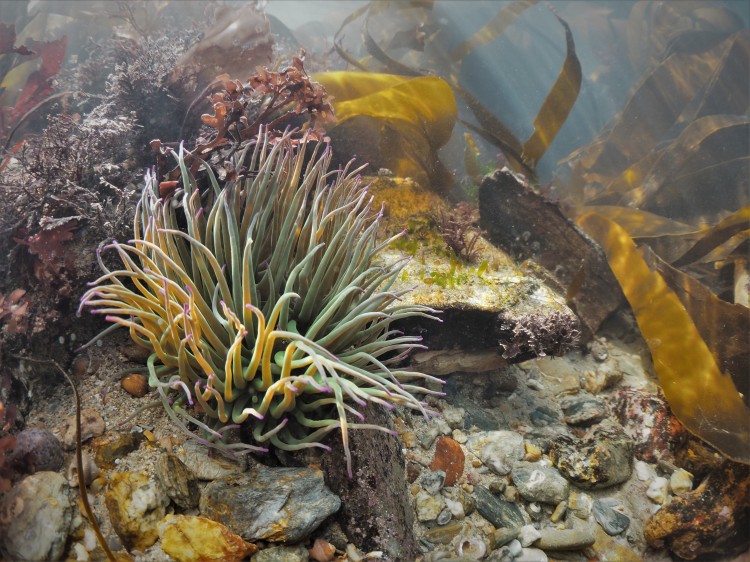 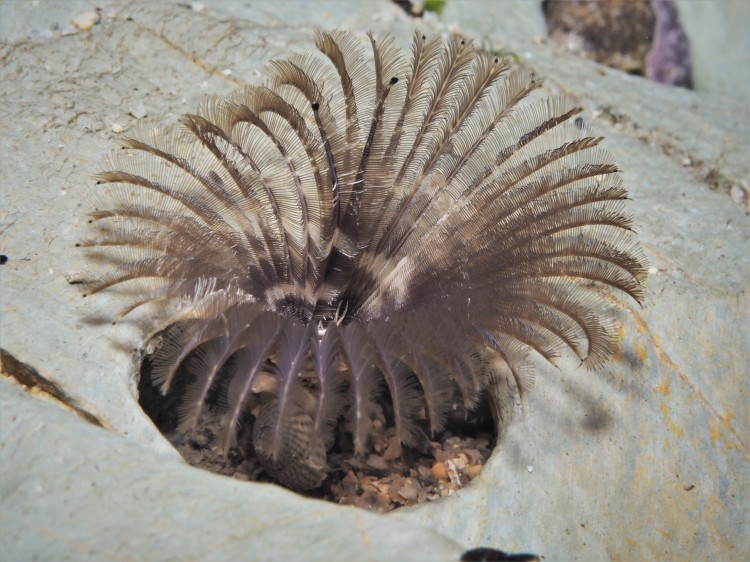 The tide was bad (i.e. low and too early to catch it on time), the water was cold and it was very windy but it was good to go for a dip this morning. I now have a different strobe arm which makes it easier to position my strobe, which has often been tricky. Time for some macro practice. The photos are not that special but I hope interesting enough for you blog readers! Above a Peacock worm Sabella pavonina sticking out of an abandoned piddock hole. Below a common Hermit crab Pagurus bernhardus, a Grey chiton Lepidochitona cinerea, a very small Dahlia anemone Urticina felina (note the warty, adhesive column) and some Daisy anemones Cereus pedunculatus. 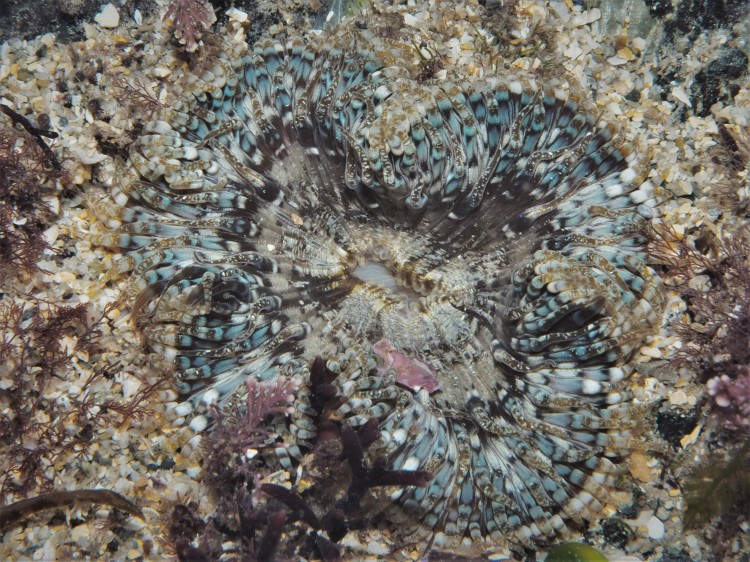 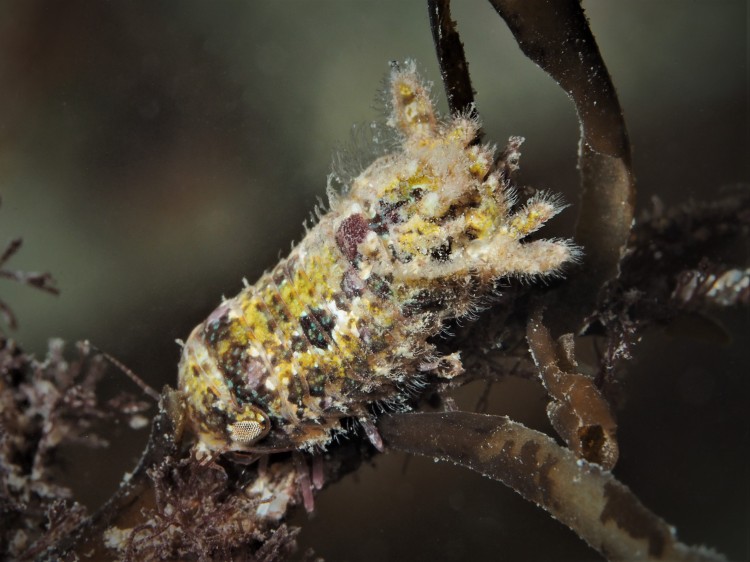 It has been a while since exploring the rockpools, as the weather has been pretty horrific. However, I had a good go last week and this weekend. Although quite bleak, there was no wind and no rain. The water is getting down to 11 degrees probably (I have not measured it), so pretty chilly. There are quite some solarpowered seaslugs Elysia viridis on the Codium seaweed but I did not manage to get any good photos. In fact, I am still struggling a lot just getting the strobe to properly light up what I am aiming to photograph. A bit frustrating but that is why I keep practicing. Above a pill isopod, probably Cymodoce truncata (with the fringing hair on the rear uropods indicating it is a male). Below, a tiny Gem anemone Aulactinia verrucosa. There are a lot of small Daisy anemones Cereus pedunculatus amidst the Coral weed, they look brownish but when you zoom in there is some blue as well. Finally, a Netted dogwhelk Tritia reticulata, which are very common and active in the rockpools. Cold but always nice to be in the water. Luckily I emerged right on time when I saw my Sainsbury’s bag with glasses, car keys and phone drifting away due to the incoming tide! 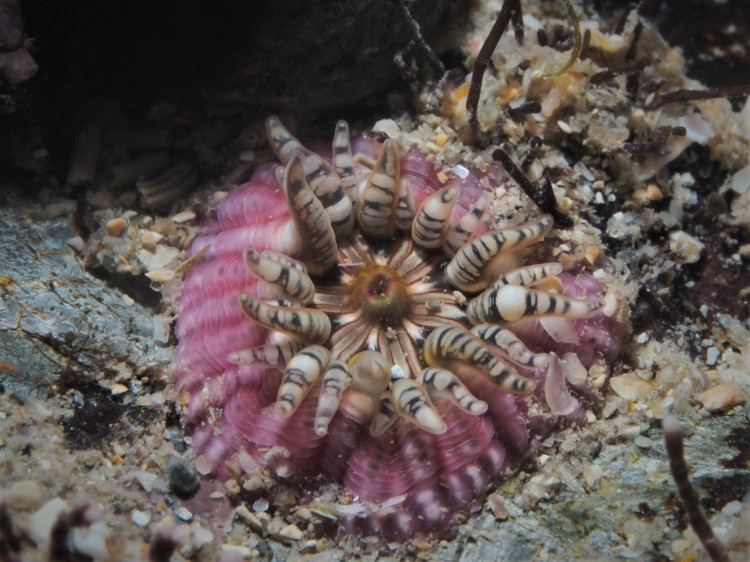 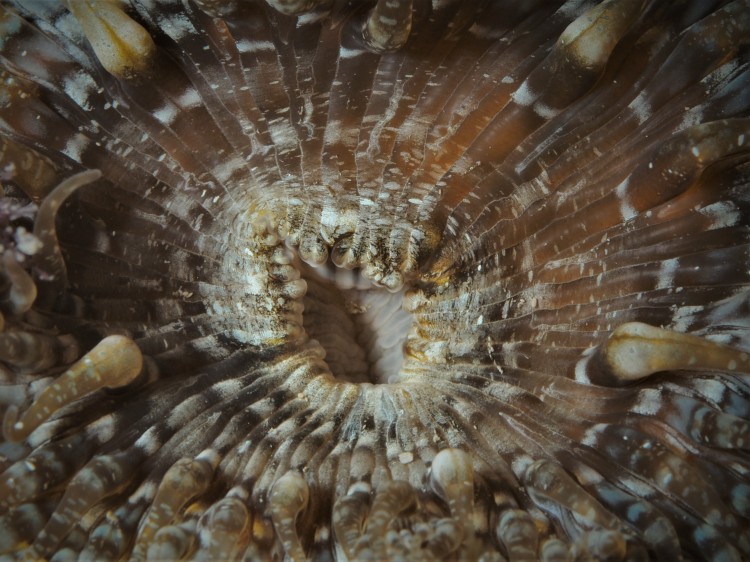 Some photos from Last Sunday at Castle Beach in Falmouth. Above, the periwinkle Littorina littorea, which aggregrates in great numbers on the upper shore. Below, three echinoderm cousins: a Cushion star Asterina gibbosa and a little Sea cucumber Pawsonia saxicola with a Brittle star in the background. It was the first time I saw this beautiful colour variant of the Risso’s or Furrowed crab Risso pilipes. More common is the very similar Montagu’s crab Risso hydrophilus, there are usually 5-10 individuals under a single rock. The small ones especially come in a range of colours that make them excellently camouflaged against the pebbles. Next a juvenile Shanny Lipophrys pholis, a detail of a Corkwing wrasse (I could pick it up, that is how low the tide was) and a shot of the beach, showing the versatility of the mzuiko 60mm lens. 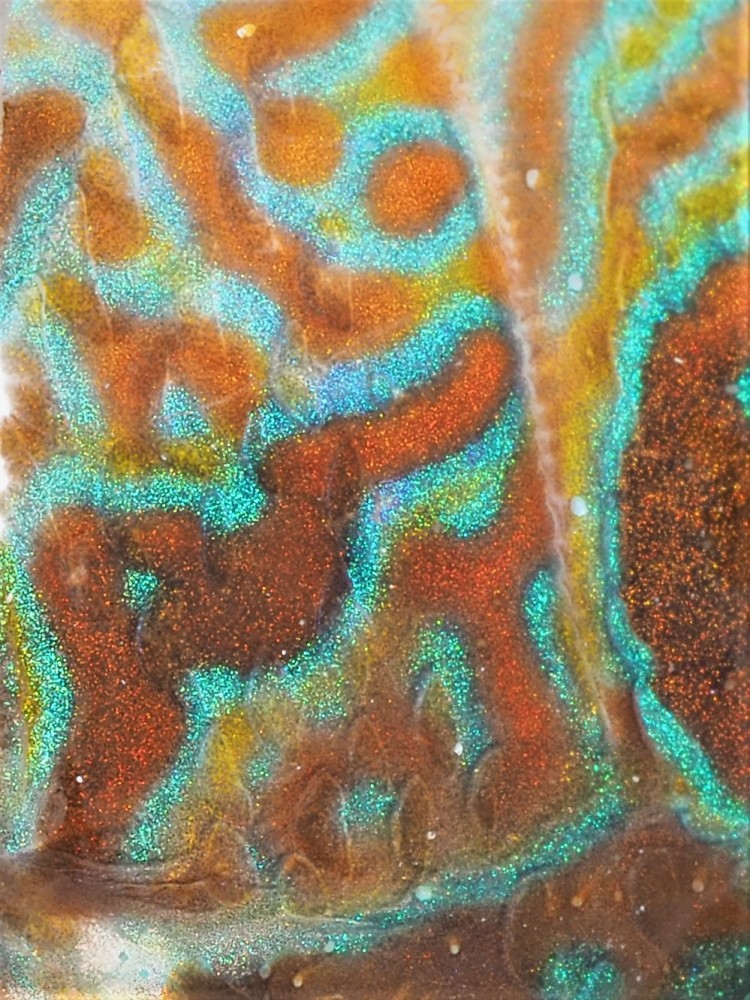 Some pics from today at Flushing Beach. Above, a pair of Green shore crabs Carcinus maenas, below two Furrowed crabs Xantho hydrophilus. (I probably should have gone for a whole crab series, as I saw several other common species…) Instead I took loads of random photos, of things that were 150 mm to things that were only 5 mm, with varying success. For instance of a Painted Topshell Calliostoma zizyphinum on the invasive Bryozoan Watersipora subatra. Also the underside of the urchin Psammechinus miliaris, showing its mouth (Aristotle’s Lantern). Photobombing top left is the commensal worm Flabelligera affinis (which I noticed as well the last time I took a version of this picture). Bit random but it was fun practicing. It actually is more difficult to take photos abovewater compared to underwater due to the glistening and the awkward position kneeling on wet gravel/rocks. Next time I might try a tripod (ideally remote flash would be used but I do not think I am going to invest in that). Btw, if you are on instagram, I also post pics as @an_bollenessor. 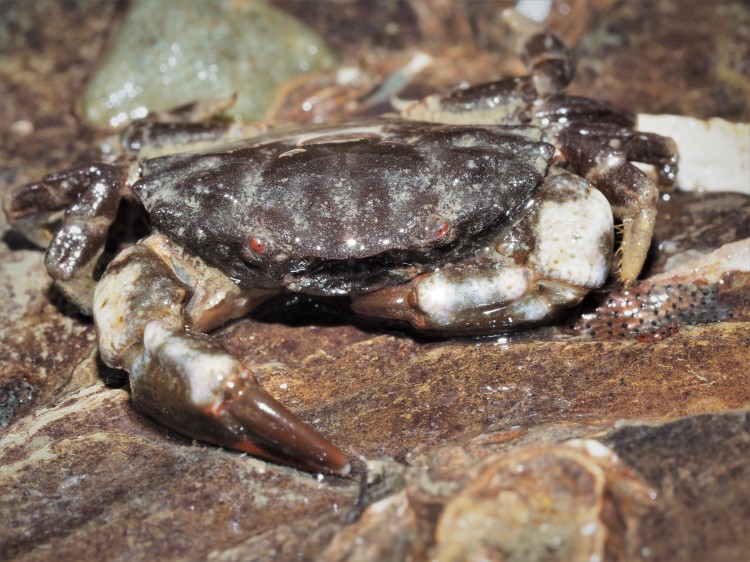 A solo dive early evening at the Silver Steps site. It was a couple of weeks I last went, and this time it was already dusk when I entered the water. My intention was to find cup corals and other small creatures growing on rock overhangs below the kelp line. The viz was good and sure enough I found what I was looking for: Devonshire cup coral Caryophyllia smithii, a solitary stony coral which is relatively common. They are very beautiful and the right size for the macro lens. I will definitely go after them again. Other finds were a golfball sponge Tethya aurantium, a baby Longspined seascorpion (this shot had potential, but it swam away unfortunately), a tunicate and a Painted topshell (very common). At the end of the dive unfortunately it was getting too dark to find objects or too properly focus; I need to sort out a dive light! 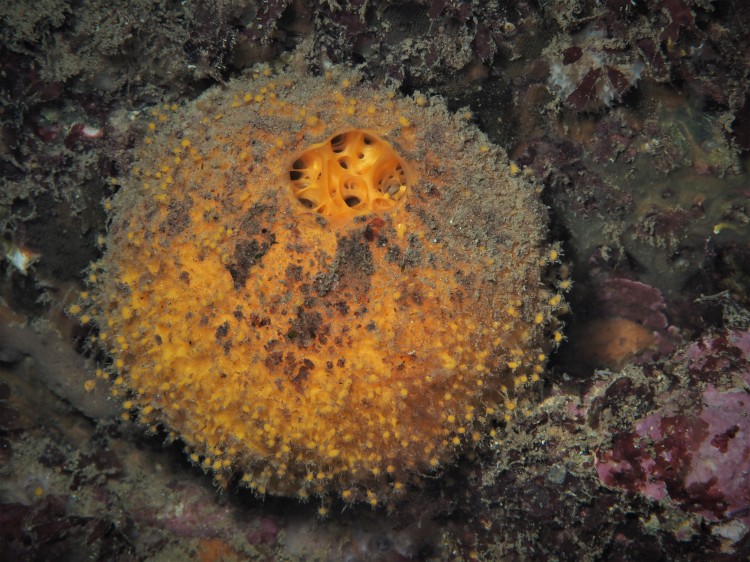 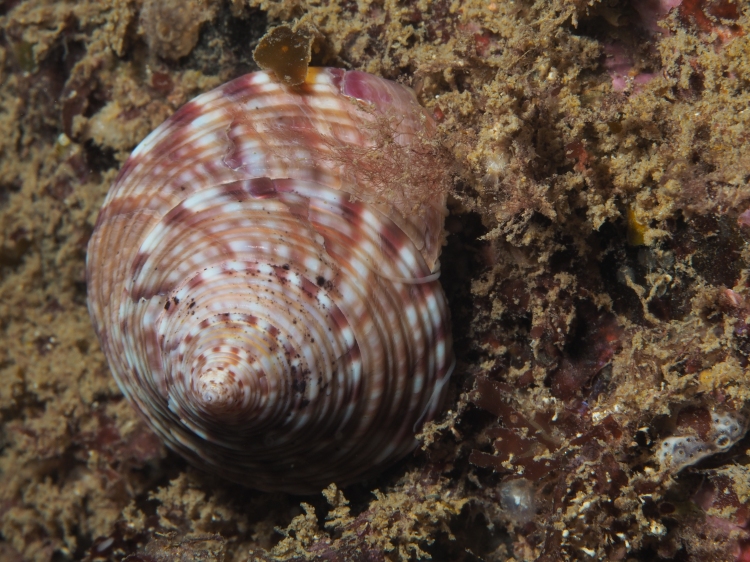 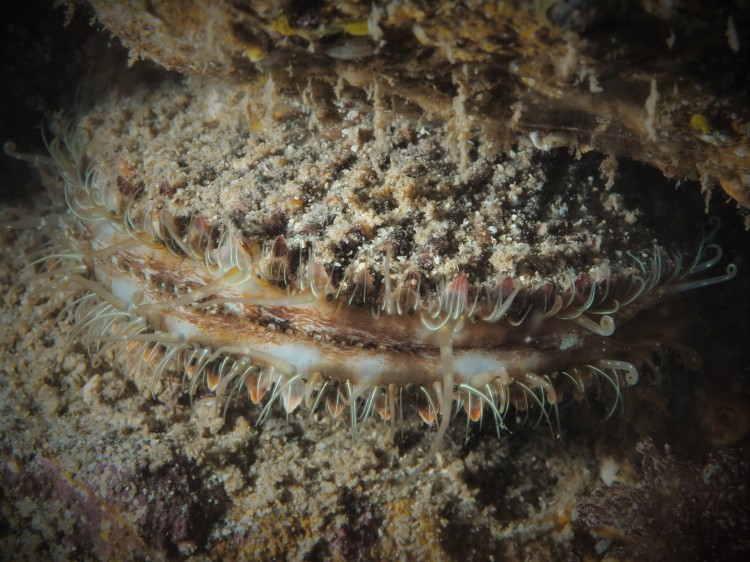 A quick snorkel in the rockpools today. Tried to photograph some gobies and prawns but they were not very cooperative. I noticed a small clam under an overhang: the Variegated scallop Mimachlamys varia (old name: Chlamys varia). This species occurs quite commonly attached under rocks here, and although it can have all kinds of amazing purple, yellow and orange colours it is usually a dull brown. I managed a couple of OK shots; it is fun to see the rows of eyes. Definitely worth trying again (and going for a much bigger Scallop Pecten jacobaeus while diving should be fun too). 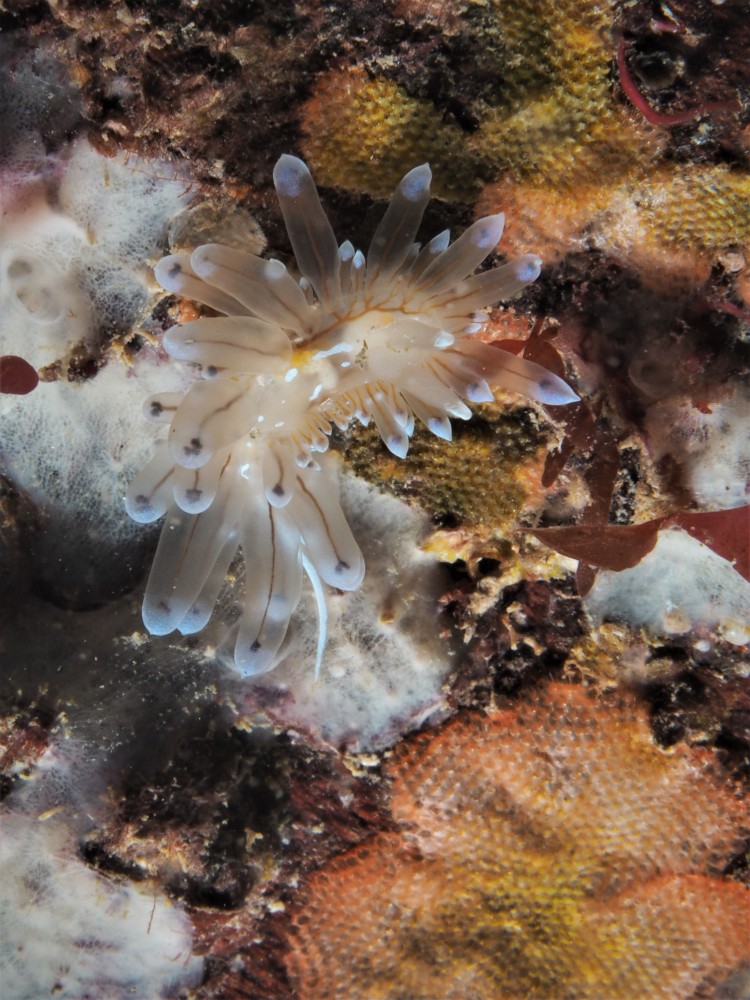 I will keep this post short, as my third Silver Steps shoredive of the year was a week ago. As you can see above, my dive was made by encountering the beautiful nudibranch Antiopella cristata (although I prefer the old name Janolus cristatus…). My camera battery strangely gave up straight after taking these pics (argh!), otherwise I would have bothered it for at least another ten minutes! The 60mm lens is great. Look at the European cowrie Trivia monacha below which is less than a centimeter in length. Not a great shot but it shows that it is possible. Finally, a common Phoronid worm Phoronis hippocrepia (Thanks Allison, please check out her great blog Notes from a California naturalist). I hope the wind will die down and I can go back soon. 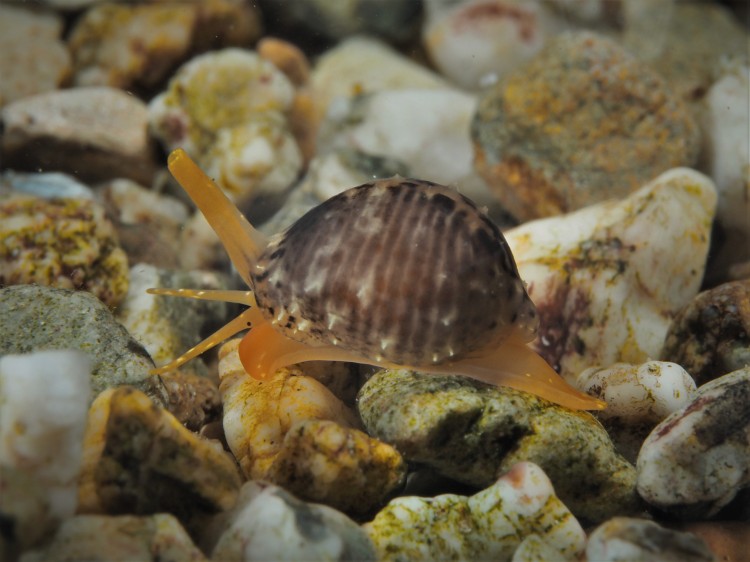 I am running out of original blog post titles; these are just some more macrophotos practicing with the mzuiko 60mm lens. Friday afternoon was a gorgeous sunny, windstill day here in Falmouth. Although I somehow did not manage to find a stalked jellyfish, there were plenty of other things to see floating around in the shallow pools. I tried my hand again at the European cowrie Trivia monacha (see last post) with better results. It is hard to get the strobe position right, so I now hold it in my hand (rather than attached to the ‘tray’ that also holds the camera) to try to take as many different shots as possible. Below, a small Light bulb seaquirt Clavelina lepadiformis and the colonial seasquirt Morchellium argus. Finally, I noticed a shanny Lipophrys pholis hiding in a crevice. It was too large to capture its whole face with the macrolens so I tried to get one eye at least. It will be fun to try to get some fish portraits next time. Btw, catch me on instagram: @an_bollenessor.

I managed to squeezed two snorkel sessions in this week to practice with the macrolens. Today it was sunny and still, finally after weeks of bad weather. I returned to the same Rainbow wrack as pictured in the last post and found some other mollusc species but none of the shots worked. (Also, very annoyingly, I had not put the lens on the 1:1 macro setting meaning I had to get out of the water, walk back to the car to dry my hands, remove the camera from the housing, set the lens and then come back…) Because I always (and often) snorkel at the same spot, I know where certain individual seaweeds are. I returned to a Codium plant on which I had seen the solar-powered seaslug Elysia viridis before and found one, 1-cm long individual. I spent most of my time trying to get a decent shot of this slow, cooperative individual. I am getting the hang of it, and played around minimising depth of field to get more light in and to remove distracting background. The backscatter is still a problem. I think having a snoot could work wonders, but I probably should try to practice some more and not fall into the trap of buying new toys. I was too lazy to meticulously tweak photos on Photoshop but used Windows Photos to spice them up, see below for a before and after: 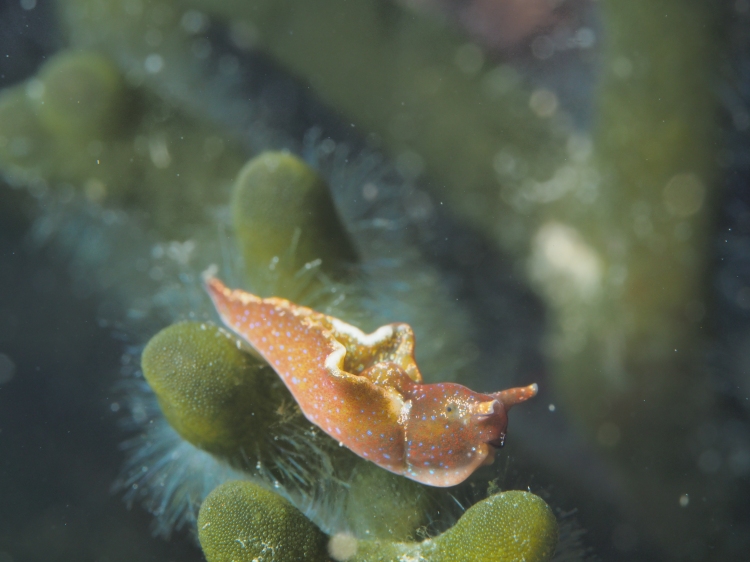 Last Sunday the weather was less good. Instead of lying motionless in front of a sacoglossan , I lay motionless in front of a European cowrie Trivia monacha. I could not position my strobe well, at least, that is my excuse. What is always interesting to see when looking at photos on the computer later are the other, even tinier, organisms photobombing such as this amphipod on the right side of the shell: