As I mentioned in the last post, I joined instagram (@an_bollenessor). One one hand it is a great way of getting inspired, on the other hand it is a bit disheartening: why even bother trying to get half-decent shots with so many fantastic photos already produced? One interesting observation though is that there are some very commonly used themes (macro photos of nudibranchs, open water photos of big pelagics, close-ups of colourful sedentary species such as frogfish) but there are few people who try to take photos of seaweeds, so that seems a quite open niche at least. I have a lot of photos on my computer from the past few years of blogging and am uploading these on my account before the weather gets better and I can go out again. Some are Canon Powershot D30, some Canon G16 but mostly iPhone4S, including the ones in this post (and so all taken above-water).

A few other things have inspired me photography-wise recently. I attended a talk by Mark Webster on his Cornish underwaterphotography at the Poly in Falmouth. I already had his excellent book ‘Beneath Cornish Seas‘, but it was very interesting to hear him talk about his approach. See here for some his excellent photos. (I also learned of a very large rockpool on Treyarnon beach that seems excellent for photography and I really need to check out.) Last Christmas, Santa gave me Alex Mustard’s ‘Underwater Photography Masterclass‘ book, which not only has beautiful photos but also is very well written. Already some time ago, I bought a copy of ‘In The Company Of Seahorses‘ by Steve Trewhella and Julie Hatcher (which has an associated facebook page). A beautiful hardcover ‘coffee table’ book with very knowledgeable accompanying text on seahorses in the UK as well as many of the animals they share their habitat with: highly recommended!

The winter season is the time for beachcombing and so I was very happy that Santa gave me The Essential Guide to Beachcombing and the Strandline; a fantastic guide to objects washed on British (and NW European) shores by Steve Trewhella and Julie Hatcher. One of the things that sets it apart from other guides is that it not only covers biological ‘objects’ (shells, fish, mermaid’s purses, sea beans etc) but also strandline debris of human origin (e.g. buoys and nurdles). After a walk at Praa Sands beach, it helped me to identify the Goose barnacle Lepas pectinata. A must-have book for anyone who likes to spend time on the beach! At Praa Sands I also found several Chama bivalves attached to a tangle of rope. David Fenwick has recently described three Chama species, all from (around) Florida (there are no native species), see here for much more detail. Unfortunately it is very difficult to tell what species it is from only the lower valve of the ‘Jewel Box’. It is interesting to see that even commonly encountered bits of rope and net can be from as far as the other side of the ocean. Hopefully there will be some westerly January storms to wash up more interesting species!

I have added a bunch of new links to the Links Page. Although I really like the WordPress ‘Booklite‘ theme, it is not great for listing things so I have added the links to descriptive text instead. One of the new links is a flickr stream of beautiful macro photographs of Gastropods and Barnacles by Wales-based Morddyn (Ian Smith). Below one example of a very small species (that I discovered in my aquarium once), Cerithiopsis tubercularis: 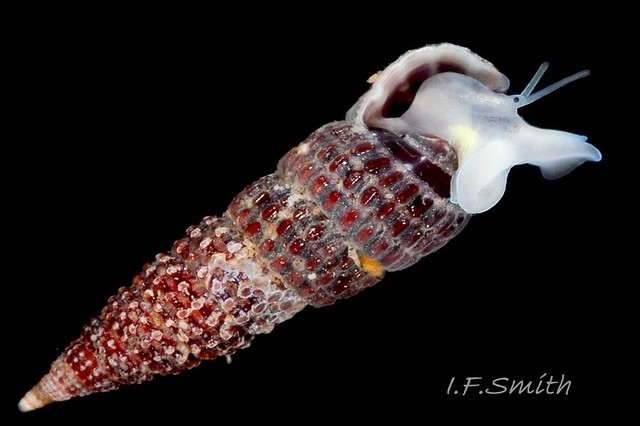 I just received an interesting facsimile ordered from Amazon: ‘The Aquarium: an Unveiling of the Wonders of the Deep Sea’ by Philip Henry Gosse, first published in 1854. In it, Gosse describes his rock pooling and dredging trips around the Devonshire coast and his experiences with keeping animals and seaweeds in his marine aquarium. I actually do not know of any other book on temperate marine aquariums, so although it is a century-and-a-half old, it might still be the most current source available (not counting writings on the internet of course). It’s a very interesting read; in the early Victorian era, scientists had only just began to realize that plants and seaweeds produced oxygen for instance.

Of course I first looked up his description of my favourite, the Bushy rainbow wrack Cystoseira tamariscifolia. He was able to have this seaweed survive ‘for some time’ in the aquarium, tying branches of dredged up individuals to pieces of rock. He describes how submerged ‘their pale olive branches become invested with a most brilliant flush of iridescent light hue varying in intensity according to the play of light that falls upon it’, but that this remarkable gorgeousness of colour is not visible out of water (although it kind of is):

“Thus, it may be compared to some Christians, who are dull and profitless in prosperity, but whose graces shine out gloriously when they are plunged into the deep floods of affliction.”

They sure don’t write like that anymore! Gosse’s aquarium was small (2*1.5*1.5 feet), with glass plates set in grooves in a slate bottom and corners of birch-wood. He used ‘white-lead putty’ to fasten the glass, which meant that when he first started up his aquarium, everything died within the first day (except for the mullet fry and beadlet anemones). Lucklily, after proper rinsing, lead poisoning could be prevented in the remainign attempts. Of course he had no pump, filter, chiller or lighting. He however had deviced a means to ‘purify’ the water: a ‘drip-glass’ hung above the aquarium, dripping down two or three gallons a day thus aerating the water. All in all his experiences of which organisms do well in the aquarium and which do not, descriptions of rock pooling adventures and animal behaviour and even musings on the spiritual use of natural history make for a very interesting read.