OK, as I mentioned in  the last post, I had been on three dives before my exceptional viz snorkel session but did not have the opportunity to post pictures. So here goes for the first dive at Swanpool with Thomas Daguerre. Swanpool is a nice little beach but I was sceptical about it, as it is mainly, well, beach. Thomas wanted to try to find some sand-dwelling creatures though and I was up for trying something new so in we went. See him at work below in some seriously murky water!

Again, spider crabs were common, sitting still but running away when getting closer, stirring up the sand. There is some sparse seagrass, arranged in thickets parallel to the strandline, some Sand mason worms Lanice conchilega can be seen in the foreground. A Spiny starfish Marthasterias glacialis was eating up a Pod razor shell Ensis siliqua. A little swimming crab hid in the sand, not sure which species. 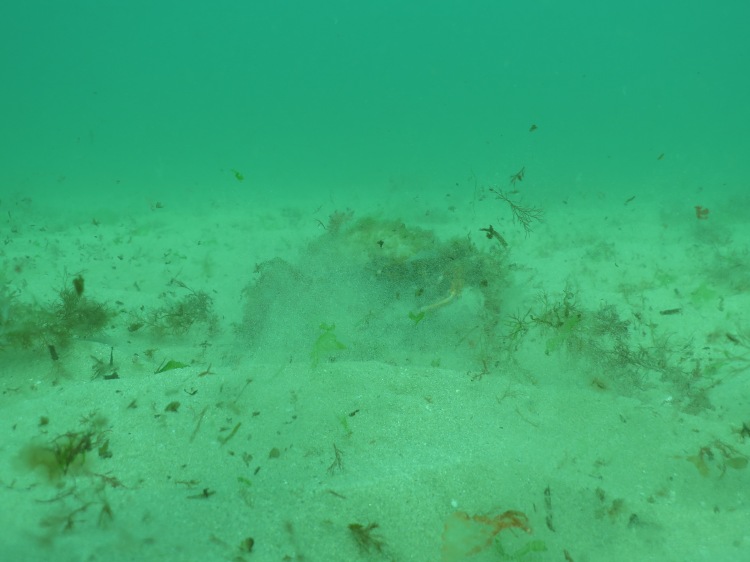 Also, jelly season has started, I saw several Northern Comb Jellies Beroe cucumis. They are exquisitely beautiful and very hard to focus on, which makes for a photographers nightmare. Apart from a Compass jellyfish, I noticed a Blue jellyfish Cyanea lamarcki. It appears to have two parasites, which could be the amphipod Hyperia galba. All in all not a bad dive. Also, I found a frisbee and a decent pair of sunglasses!