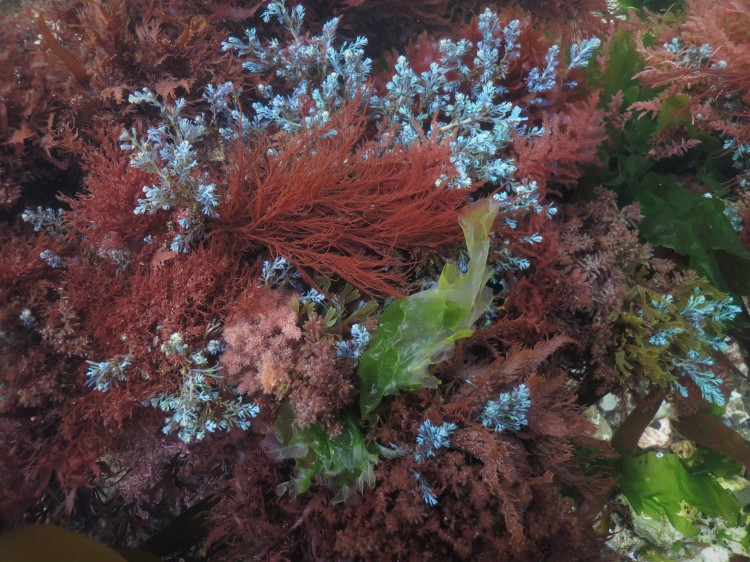 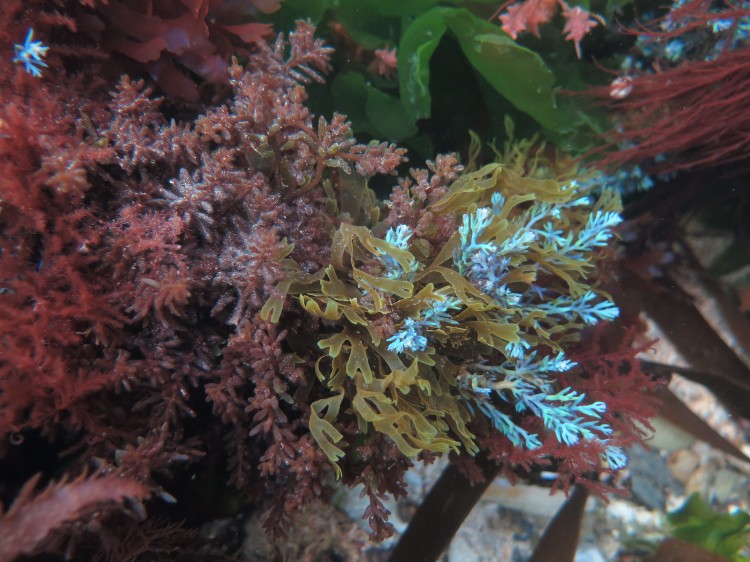 A whole bunch of photos from last Friday, starting out with the prettiest ones depicting a whole range of species, most strikingly the crimson Gracilaria and blue Cystoseira. I was so pleased with it I shared it on the Seaweeds of the NE Atlantic facebook page and Frances Bunker, one of the writers of the highly recommended Seasearch Guide to Seaweeds of Britain and Ireland, kindly uploaded a photo with all scientific names. This is a great idea and I should do the same for future posts (I have not done so yet as I am back home and did not bring the guide). As good as it is to be back in the Low Countries, I am missing out on being able to snorkel in some very good weather and likely better visibility than for the photos in this post. The rock pools have changed markedly since the last post a couple of weeks back, with hardly any patches left without seaweed growth. The colours have changed too, with much more of the green Ulva, and more brown (e.g. Calliblepharis) relative to reds. Some seaweeds seem to be in decline already (e.g. Gastroclonium) while some are more prominent (e.g. Palmaria). Below I have posted a range of photos, some are pretty good, others not so much, but they give a good impression of the diversity (most photos have at least ten species in them but I have not gone through the trouble of typing all the names): 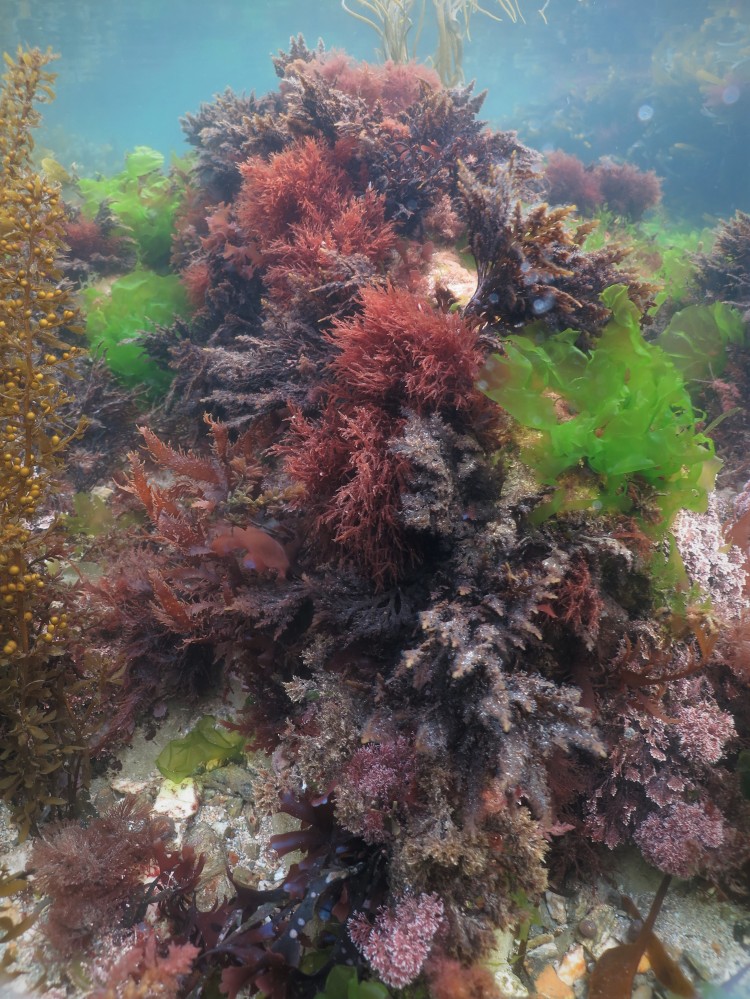 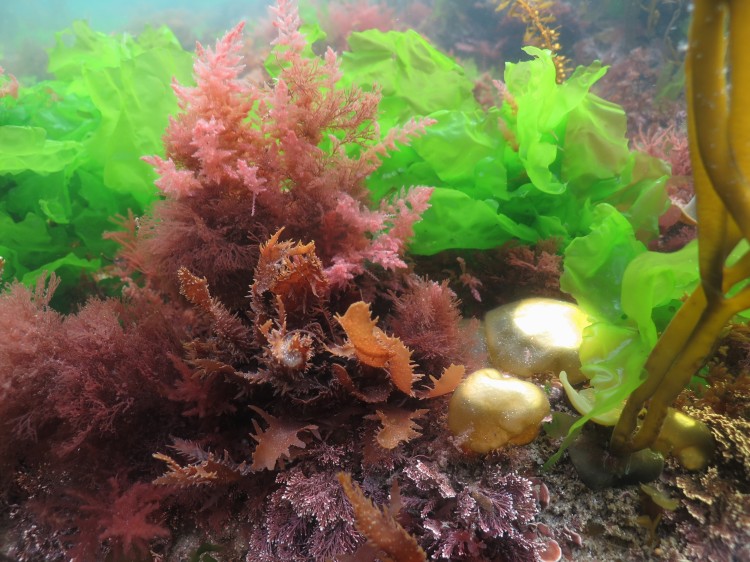 I have no clue what the brown, thin, frilly species is above. Below some individual species, first Dulse Palmaria palmata and Sea flax weed Stypocaulon scoparium. Not 100% sure about the next three: Dumontia, Lomentaria and either Laethisia or Colpomenia (I should know this…). Finally, some photos taken under the cover of Thongweed Himanthalia. More photos next week I hope! 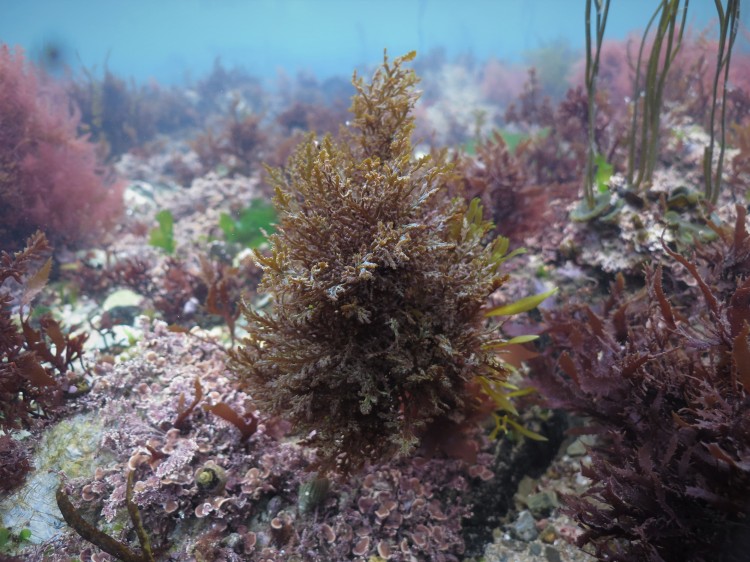 More seaweed photos, taken a couple of days after the ones in the previous post, when it was overcast and the water was less clear. The photos are not as good, but there are still a lot of interesting species to see. Below some photos showing the diversity of species next and on top of each other. In the last two months, most species have been growing quite a lot. There are quite large patches of Slender-beaded coral weed Jania rubens. Bushy rainbow wrack Cystoseira tamariscifolia plants are completely overgrown with all kinds of epiphytes, seaweeds, sponges and colonial tunicates, and often have a Nursehound egg case attached. 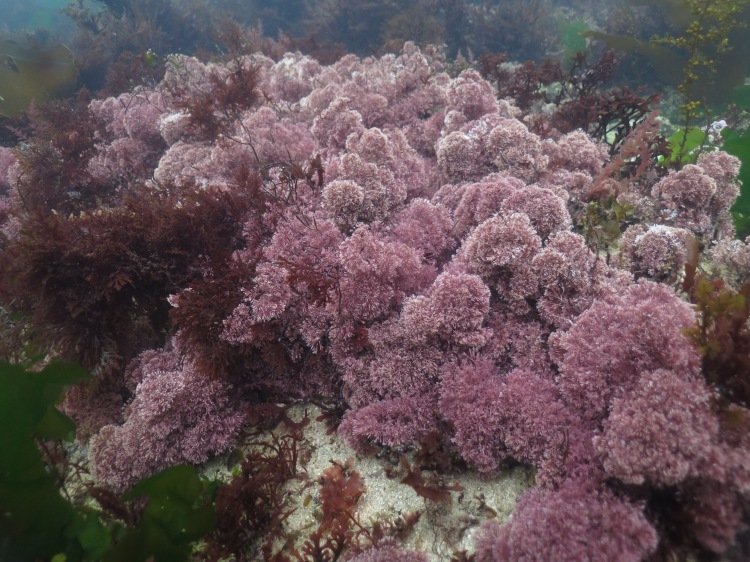 Next, photos of individual species. First some flat reds: Leafy rose weed Rhodophyllis divaricata, Beautiful fan weed Callophyllis laciniata, Branched hidden ribs Cryptopleura ramosa (probably), the invasive species Devil’s tongue weed Grateloupia turuturu and Under tongue weed Hypoglossum hypoglossoides. After that, two species that look a bit similar: left the reddish Discoid fork weed Polyides rotundus and right Clawed fork weed Furcellaria lumbricalis. The former is one of the most common species (also on the photo above it) but difficult to photograph as it usually sits on the white sand. After that, Juicy whorl weed Chylocladia verticillata. Last, two quite unassuming species: Black scour weed Ahnfeltia plicata and Sea flax weed Stypocaulon scoparium. Identifications made possible using the must-have Seasearch Guide to Seaweeds of Britain and Ireland, David Fenwick’s excellent aphotomarine website (and personal communication) and the good people of the Seaweeds of the NE Atlantic facebook group (any mistakes are my own). 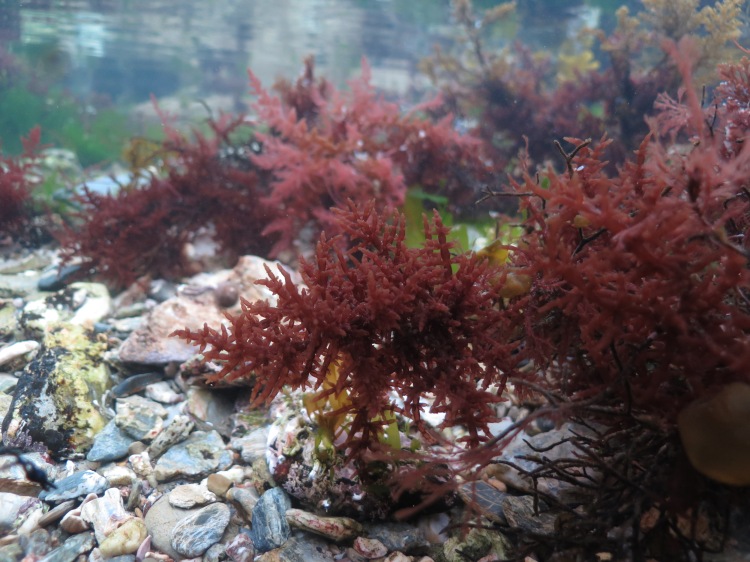 This friday, I tried my hand at some more underwater rock pool photography with my point-and-shoot Canon Powershot (see also here and here). This is both rewarding as the colours of seaweeds are so vivid and the textures so varied, and frustrating, as I cannot use the viewfinder and even if I could, lots of shots would be much better using a wider-angle lens. Also, I am often kicking up silt with my wellies and the nicest shots often are just out of reach. So next time, I should really photograph whilst snorkelling. (It would be great to use an SLR in an underwaterhousing. I bought a much cheaper and much more cumbersome ‘underwater-camera bag‘ without remembering that my old, not-so-frequently-used-anymore Canon EOS 400D does not have a viewfinder. I am afraid this will make the experience less, not more, fun…) Anyway, the trick for now is to take many pics and hope some turn out all right. I like the ones with a water surface reflection best. The nicest one was a snakelocks anemone among corraline algae. Next, what is may or may not be Sea flax weed Stypocaulon scoparium. After that, the brown Divided net weed  Dictyota dichotoma growing inbetween Discoid fork weed Polyides rotundus, a Bull huss/Nursehound/Large-spotted dogfish Scyliorhinus stellaris mermaid’s purse and a Spiny starfish Marthasterias glacialis. Probably more photos soon as the pools look by far the best in early spring. 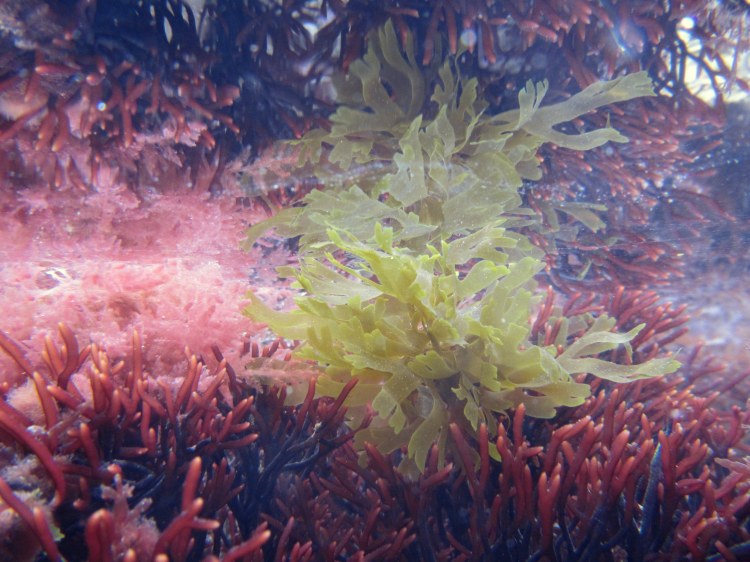 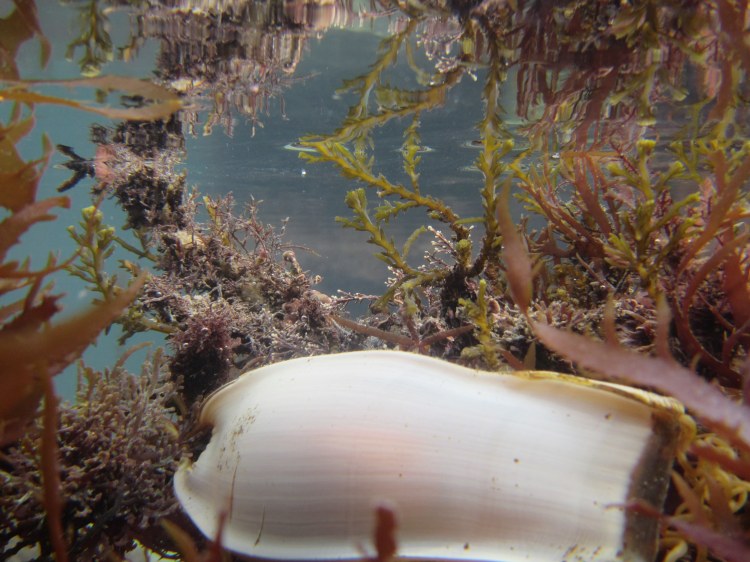