A few weeks back I ordered a GoPro Hero 3+ Black Edition, a tiny video camera that is especially popular amongst those that jump of cliffs etc. It comes with a housing that is waterproof up to 40 meters and has excellent video quality. The still images are not so great, you cannot focus or zoom and there is not even a display, although there is an app to control the GoPro using a phone which is very user friendly (the wi-fi connection however is lost as soon as you submerge the camera so you cannot use the phone display to set up underwater shots unfortunately). Of course I will try out the GoPro for diving, but I do not have very high hopes, as there probably will be loads of shaky footage under bad light conditions. Instead, I thought it would be cool to use the time-lapse function in rock pools. I was inspired by the following video:

(For two cool starfish time-lapse films here and here; the BBC ‘Life’ documentary of course is the cream of the crop.) I clipped the GoPro to the plastic baseplate it comes attached to in the packaging and strung that to a lead diving weight using a tie-wrap. The first time-lapse movies turned out OK-ish, the actual video is more impressive quality-wise. It is fun to see all the little gobies but it is obvious that they are not in focus when up close (and too small further away), so probably it is a good idea to bring some frozen artemia to lure them to the best spot. It is obvious that time-lapse works best for slow moving animals such as starfish; fish just flash by, although the nice thing is that you discover that there are many more fish around than you would think from just glancing over rock pools. Actually, it might be nice to try some slow-motion movies of fish using very high frame rates. 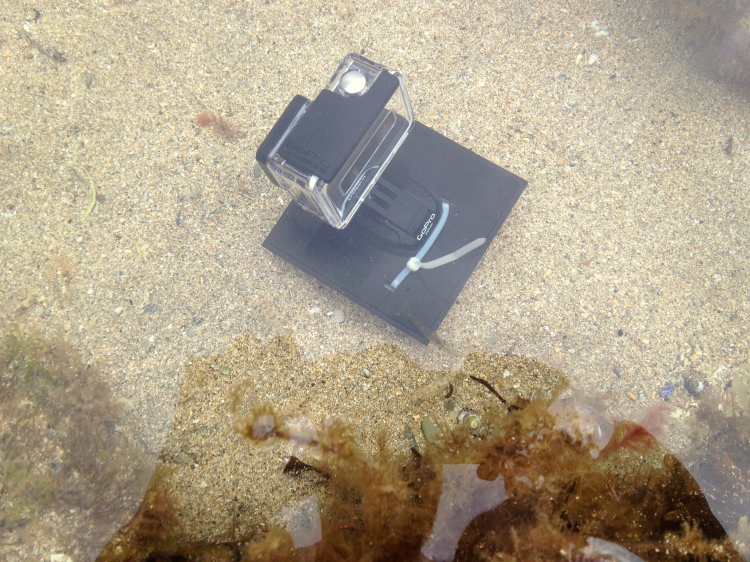 The short clips I made are not good enough yet too post; the water was full of bits of seaweed, it was quite cloudy and the rock pools in general do not look as nice as they do in spring (lame excuses I know but see the picture below taken at Falmouth a couple of weeks back: it definitely does not look like this at the moment!). I also need to think about different subjects, as macrophotography is not really an option (although this lens might go some way).

As a small consolation, I have added two videos from when I was rock pooling in Cameroon a couple of years back (this is a bit of an unusual holiday destination but highly recommended!). I made them using my now defunct Panasonic Lumix (DMC-F10) in very shallow water (<10 cm). Unfortunately I do not know what species of fish these are but they look like awesome aquarium fish (not too many people with a West-African marine biotope aquarium I reckon). The Lumix is not known for great macro but these vids are not bad (I fear this type of movie will not be an option for the GoPro…). I hope to make some cool GoPro videos soon and post them here!