Low tides over the weekend, see the previous post for the trip on Saturday in Flushing. On Sunday the wind resulted in the water being swept up quite high on the shore unfortunately (the next very good tide I will make sure to check the wind a bit better, probably would have been a good idea to have gone to the north coast). Also the rain made swiping my iPhone very difficult and I was absolutely drenched. Luckily I had already taken a long lunch break on Friday when it was sunny! As I found a good number of species I will divide them up over two short posts instead of a very long one. In this post some species that have featured before, but that I now have taken better pictures of: a Shore clingfish (or Cornish sucker) Lepadogaster lepadogaster, a particularly purple Spiny starfish Marthasterias glacialis, a particularly orange Painted topshell Calliostoma zizyphinum as well as a close-up of the ‘normal’ colour variety, Blue-rayed limpets Helcion pellucidum, Seven-armed starfish Luidia ciliaris and a Bull huss (Nursehound shark) Scyliorhinus stellaris mermaids purse. Nice colours all around: 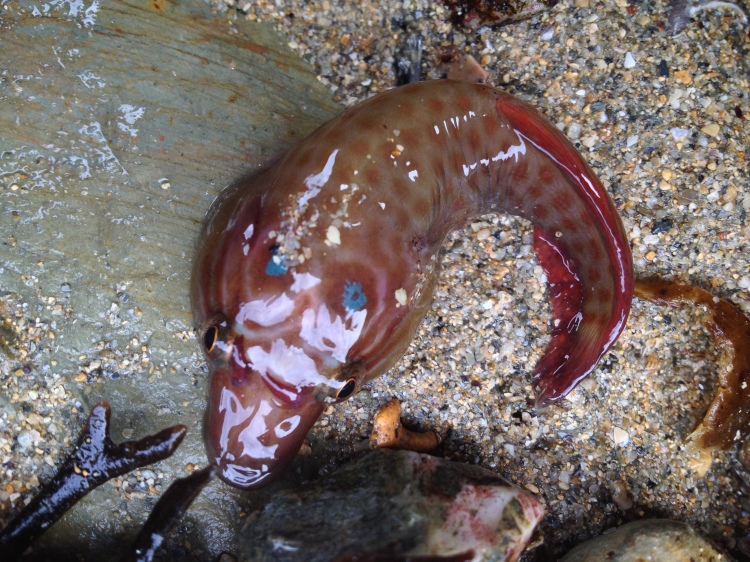 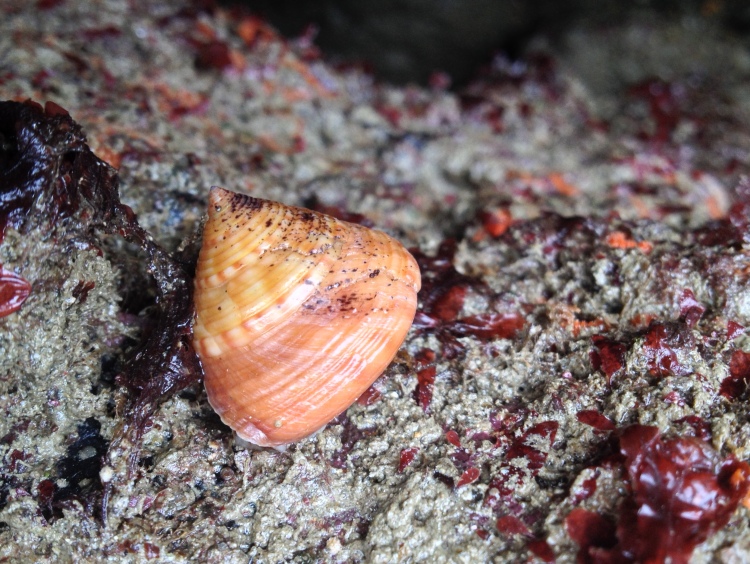 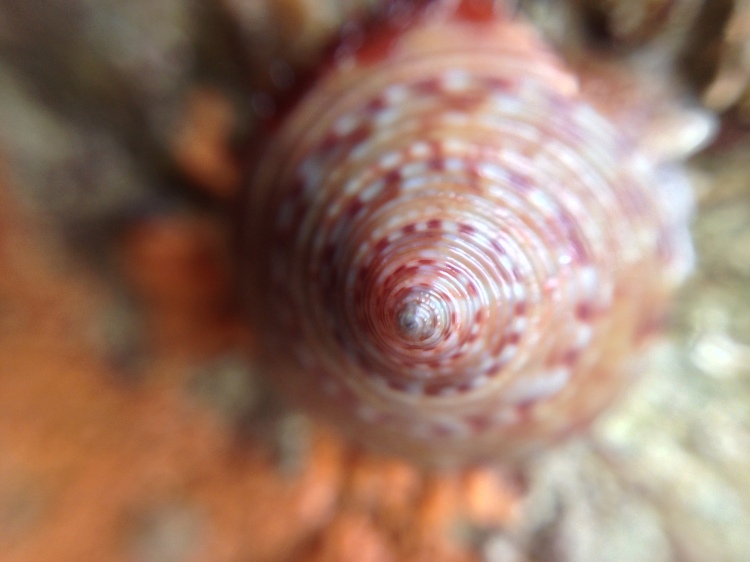 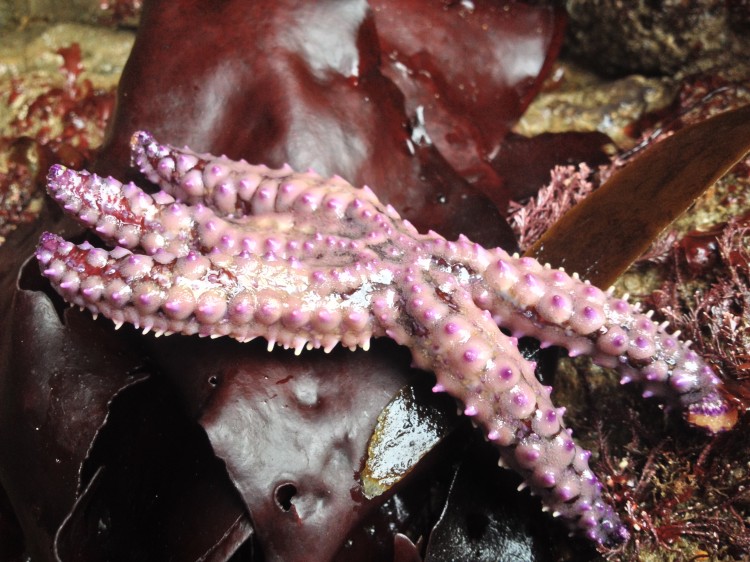 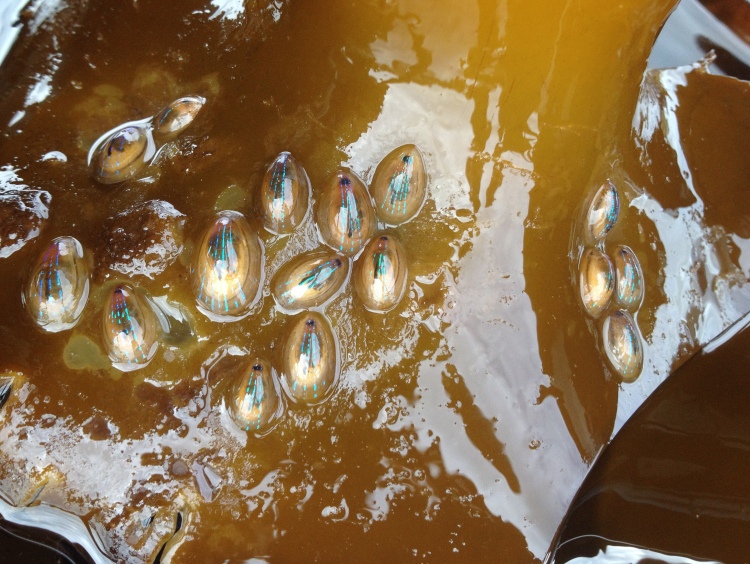 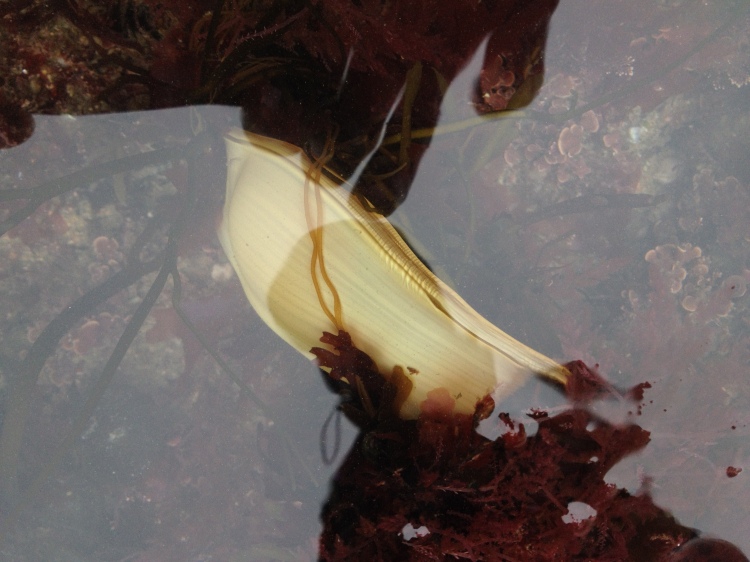 There were exceptionally low tides this weekend so I was quite stoked to get out and find some new species in what is normally the subtidal. It was raining and even hailing quite a bit but we were on a mission! Fortunately, the sun came out later and my jeans could dry up. Sea urchins are not common in the rock pools that are usually accessible at low tide, but they are quite common a little deeper. The same goes for Sea cucumbers. These are hardly ever pretty but the following species is ugly even in holothurian terms. According to David Fenwick it is a Pawsonia saxicola (I have seen a prettier incarnation before): 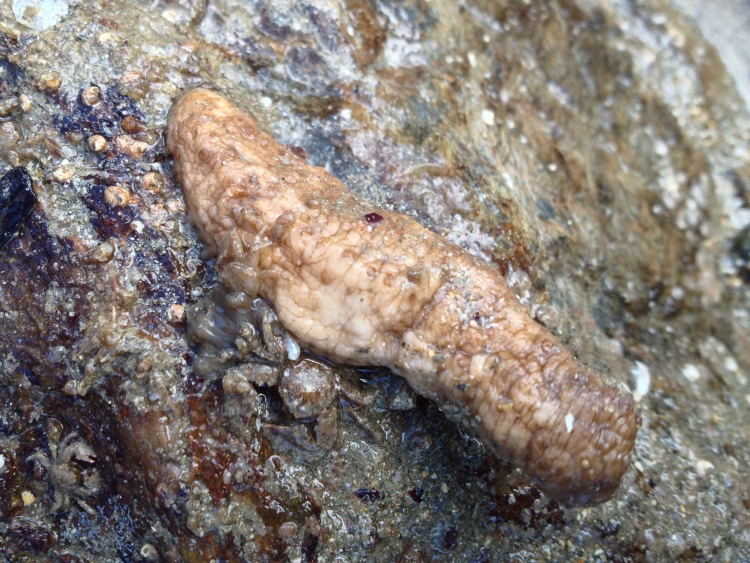 I noticed a little gastropod which looked vaguely familiar on a Pawsonia when checking my pictures. I could identify it as a Eulimida species in my old Poppe and Goto ‘European Seashells’ book, which also mentioned that many species in this family parasitize echinoderms so that fitted. David Fenwick’s excellent site Aphotomarine has great pictures of pretty much all species occurring here in the Southwest, including a much better one of this Melanella sp (identified through David’s correspondence with Jakov Prkic). David has also just launched a website dedicated to Stalked jellyfish: stauromedusa which looks amazing. 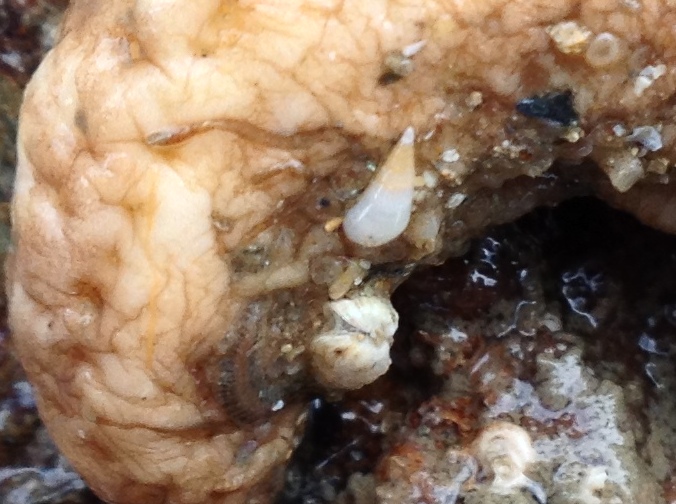 At the end of the ‘session’ I glanced something red, white and blue; a colour combination that I had seen only on photographs before. It was a single, juvenile Spiny squat lobster Galathea strigosa:

A lot of usual suspects were found as well of course, here a Cornish sucker Lepadogaster lepadogaster and a Shore rockling Gaidropsarus mediterraneus:

The rockling has a groove in front of its dorsal fin filled with hairlike fin rays that are continuously beating. Finally, not a very good picture but I’ve posted it because this is the longest animal in Britain: the Bootlace worm Lineus longissimus can grow up to 10 meters! 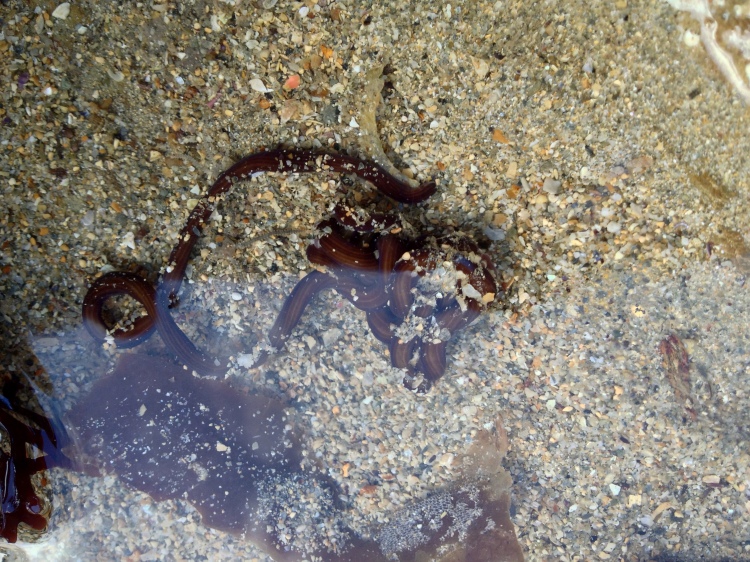 When looking for pictures of the squat lobster, I realized I have quite some neat old pictures to post. I should have started the blog when starting up the aquarium to keep things chronological, I will use the next couple of posts to get rid of this back log. First the fish. I have two Rock gobies Gobius paganellus in my tank. The big one is voracious and after a feeding session has a visibly distended belly. It is a curious fish that often comes to check me out when I am taking a picture. It is beautiful too:

However, I will attempt to catch it and release it, as I suspect it to be a bit too large (three inches) and rash. My worm pipefish Nerophis lumbriciformis are very shy and they might be bullied by large gobies and blennies. I actually suspect the big rock goby to have eaten my recently disappeared beautiful little Montagu’s blenny Coryphoblennius galerita, a species I have only found one time:

A worm pipefish Nerophis lumbriciformis. To replace the rock goby, I will try to catch some Two-spotted gobies Gobiusculus flavescens later. This species is also beautiful, but smaller and it spends more time in the water column which is nice. It is not a rock pool inhabitant though; it lives among seagrass. I have seen many last year when snorkelling. I need to look into a good net to catch them! I had two  large Shannies Lipophrys pholis as well that I released again, I still have a small one left:

I also had three thick-lipped mullet Chelon labrosus in the tank. These fish are quite ugly as adults, but juveniles are nice, restless silver fish. All  fish mentioned above are benthic (hang around the rocks rather than in the water column), whereas this species mostly swims at the surface and so really adds to the aquarium. I released these three when changing up the tank once and I now regret that. They are fast swimmers so quite difficult to catch (at least with the small aquarium net I use). Since they are so restless I did not manage to take a decent photograph. I have also added a Shore rockling Gaidropsarus mediterraneus and the cling fish the Cornish sucker Lepadogaster purpurea at one point. I should have known that these were mistakes as these are fish that mainly hide under rocks and I have not seen them since adding them to the aquarium. I will post some pictures of these fish in their natural habitat later.